Raveena Tandon opens up about unity in bollywood, rape and punishment, and meeting nirbhaya’s mother. 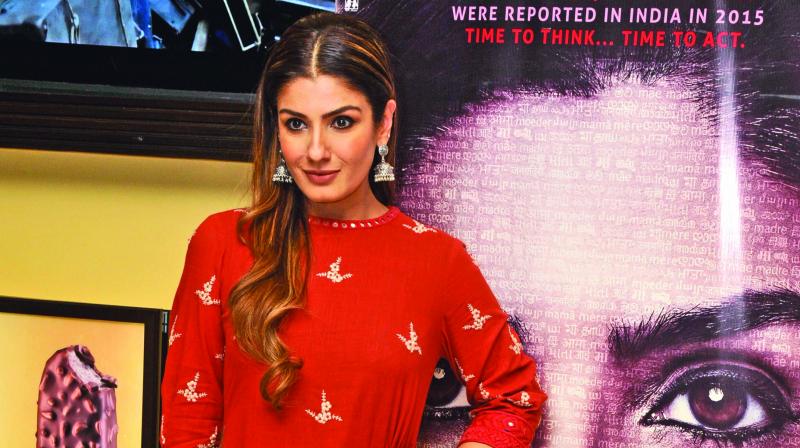 The mast mast girl of Bollywood, Raveena Tandon, was in the capital recently, but unlike her usual happy-go-lucky self, this time she was in a pensive mood, talking about rape, the absence of fear among criminals, the need to sensitise our men, how it’s time to make stronger and more effective judicial laws, and how Maatr, her latest movie, touched and shook her up.

Unity and secularism in B’wood
Be it actress Kangana’s comments on nepotism or singer Sonu Nigam’s recent statement on azaan and ‘forced religiousness’ which have been making news, the film industry today gets divided over different issues, political ideologies, controversies and comments. But the National Award winning actress says the Hindi film industry is the epitome of a secular social body and she is happy to be a part of it.

“I am a product of this industry. I was born into this industry, grew up in a family that has been a part of this industry, earned my livelihood and pursued my dreams here, and all I can say is that Bollywood is an ideal example of a secular structure. We have people from all walks of life coming here day in and day out to make a living irrespective of caste, class, creed, colour, religion or orientation. We break bread together and work together. Unlike what people may think, only (one’s) talent matters here and hard work is valued,” says the actress proudly.

True power of a woman
Raveena’s movie Maatr, that released yesterday, narrates the story of a mother and daughter getting brutally raped in the national capital, the daughter’s subsequent demise and how the mother then takes revenge. One of the famous dialogues from the movie states, Agar hume Raavan ko haraana hai toh hume aapne andar ke Ram ko jagana hoga. Ask her why Ram and why not Sita, and she says, “We can’t change what’s written in our epics but all I can say is that a woman is highly versatile. Women can choose to take the avatar of Ram or Durga or any other powerful being if and when they feel the need to embrace it. It’s beyond any gender-related connotation. The Supreme One that we once used to refer to as Trishala was created using the powers of the Holy Trinity — Shiva, Vishnu and Brahma. And she was unbeatable. That’s the true power of a woman.”

Talking about the movie and how it has impacted her, the mother of four beautiful children explains, “It was not easy at all. It was quite disturbing. In fact, the entire unit decided to take a two-day break in the middle of the shooting to get their minds and act together. Being a mother, it was harder for me to go through the entire movie. My daughter is 12 now, just like the girl in the movie, I feel extremely vulnerable thinking about her safety.”

Nirbhaya — aftermath
Meeting Nirbhaya’s mother was another deeply moving experience for Raveena. “I met Nirbhaya’s mother during an event and believe me, five years down the line, her tears have still not dried. These were her exact words: ‘Ma’am, everything happens for a period of four days — the first day, the press/media and everyone covers it; the second day, there will be a panel discussion; the third day, a candlelight march or protest; the fourth day, politicians come to offer compensation; and the fifth day, everything is back to usual, and everyone’s forgotten about the incident.’ Her words hit me so hard.”

Stronger laws, stronger punishments
She strongly feels justice has been denied to Nirbhaya’s parents, and asserts, “As far as I am concerned that 17-year-old who raped (Nirbhaya) could very well pay for his crime, he could have been given a harsh sentence because for me what that person did was not normal. He was a sadist psychopath and he should have been thrown in a psychiatrist ward first rather than being rewarded a sewing machine and incentive post his release.” She adds, “The main problem with our country is its judicial system, which, to be frank, is quite old and dated. Secondly, the punishments are not harsh enough. Laws need to be changed to relate to the times we are living in. Did we need a Nirbhaya to realise the flaws in our juvenile justice system? People are not afraid to commit crimes today because there are no examples of extreme punishments when gruesome crimes are committed.”

Men need to join the fight
Raveena, who has been actively involved in empowering women since a long time, urged young men to speak out when women are degraded; husbands to support wives to pursue their ambitions; businessmen who mentor women to share their experiences; male friends to care for their female friends; and more men to champion women’s rights. “Women share this planet 50/50 and they are under-represented. Women alone cannot fight the deeply entrenched stereotypes in our society. Even though women are speaking out and opening a greater platform for all sorts of dialogues, I feel that men need to take up a highly involved role in all this. Our world will not change until men think differently about their roles and what it means to be a man. We can do that only when we enlist men to speak to other men. The more they come forward, the more easily we will be able to resolve issues, together,” she says.