She also attended the premiere as a special guest of celebrated British novelist, Neil Gaiman. 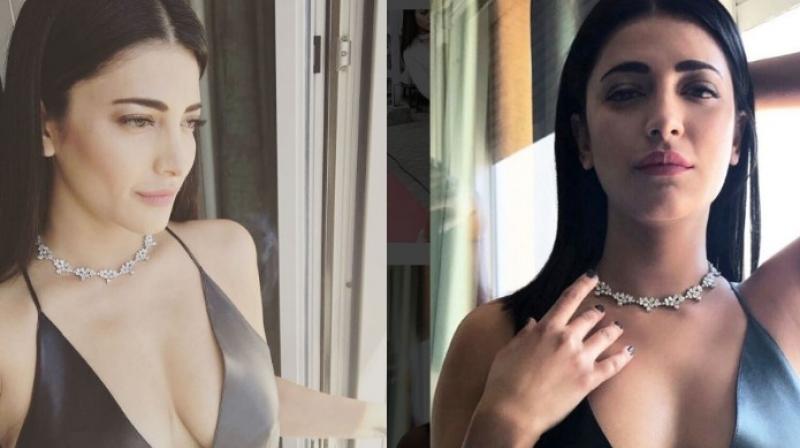 Mumbai: Shruti makes her third and final Cannes appearance attending the premiere of 'How to Talk to Girls at Parties' adapted from author Neil Gaiman's short story.

Ms. Haasan most certainly made her presence felt and how at Cannes 2017 with her smashing red carpet looks.

After doing two appearances for her film 'Sangamithra', the trilingual magnum opus scheduled to go on floor in August, Shruti was seen attending the premiere of 'How To Talk To Girls at Parties' starring Elle Fanning and Nicole Kidman, directed by John Cameron Mitchell.

She attended the premiere as a special guest of celebrated British novelist, Neil Gaiman, who wrote the short story that was the film's inspiration.

Says an insider source, 'Neil Gaiman has been one of Shruti's all-time favorite novelists. She's followed his work extensively and they had a chance to connect a short while ago over Twitter. They met in LA and stayed in touch via mails and messages. When Neil realized Shruti was in Cannes, he was thrilled and invited her to attend the premiere of the film as one of his special guests. She was delighted to go be a part of his big celebration and attended the premiere on May 21."

Neil has gone on record previously talking about how much he appreciates Shruti as an artist, to the extent that he has even stated that he would gladly pen a musical only if it starred Shruti.

"We first encountered each other on Twitter about a year or so ago. I think I had mentioned how much I want to visit India, and Shruti offered to help show me the country. She's an enormous fan of my writing, and has sent me lots of clips, both of her work in films and music, and of things and performers she thought I should see or would enjoy. And I, in turn, have sent her books and things to read ahead of the crowd. She's a delight, really smart and grounded, and her music is remarkable" he was quoted.

Talking about attending the premiere on Neil's invitation, Shruti says, "I was super happy to be invited for the film. Neil is my favorite writer and I loved the film as well."

Shruti sported yet another black look and totally made it work, this time in a Valentino ensemble with jewelry by Chopard and wit Christian Loubotin shoes and clutch. She was styled by Shreeja Rajgopal with hair and make up by Tarryn Kelly.

Her look at Day 1 at Cannes is breathtaking!