The song ‘Radhe Radhe’ from Dream Girl, celebrates the spirit of Janmashtami. 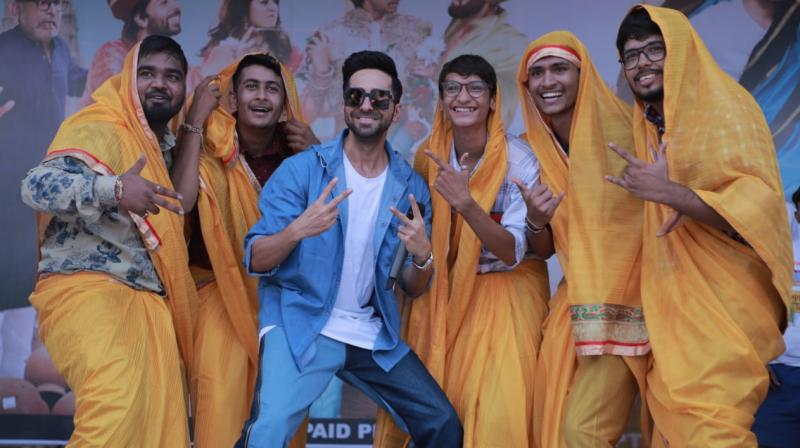 Mumbai: National award-winning actor, Ayushmann Khurrana, ahead of his upcoming release ‘Dream Girl’ had been invited to be a part of the Dahi Handi festival in the city of Baroda, Gujarat just ahead of the festival of Janmashtami. The super talented actor graced one of the biggest Dahi Handi festival celebrations in the country and made his fans extremely happy!

The pictures from the festival see an ecstatic Ayushmann Khurrana being on the stage amongst a humongous crowd who cheered for the actor while he hit a piñata with a bat, symbolising the essence of Dahi Handi. The pictures have also captured Ayushmann posing with his fans, who came dressed in a yellow cotton saree, imitating Ayushmann from his upcoming role of Pooja aka the dream girl!

Gujarat is the state which is known for best celebrating the festival in full splendour and as Janmashtami, inches closer, the actor is visited Baroda where he met and interacted with tens and thousands of his fans, majorly groups of college students and youngsters who came to compete in the Dahi Handi festival.

The song ‘Radhe Radhe’ from Dream Girl, celebrates the spirit of Janmashtami and was played throughout the festival which certainly pumped up the festivities. It’s a colourful and peppy number, which although is being played across the nation to promote the festival of Janmashtami, can also be otherwise played!

Ayushmann Khurrana has been making headlines all year for his stellar performance in 'Article 15' and for winning the national award for best actor for 'Andhadhun'. Now, we get to see the actor on the big screen in a yet another unconventional role where he is a complete package of entertainment with his quirky and enjoyable character. The trailer of 'Dream Girl' has been loved by all and we are all for it.