Amitabh Bachchan, arguably Bollywood’s biggest star, sees crowds throng outside his Juhu bungalow on Sunday evenings waiting for him to greet them 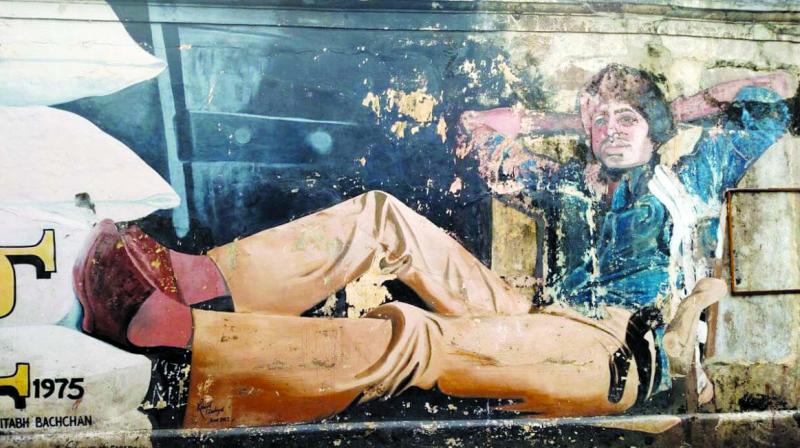 Pratiksha – The Wait Sunday, 3:45 p.m.: The Great Old Thespian starts stirring awake. Perhaps he had nodded off to the strains of Shivkumar’s santoor. Or fallen asleep to Manna Dey singing the poetry of his illustrious father. Since — mercifully — he doesn’t dwell in the Big Boss house, we cannot know.

A Poor Young Scribe arrives at Kapole Society on Juhu’s Vaikunthlal Mehta Road and stations himself outside a nondescript, concrete cube of a house. The next arrival takes a selfie with its nameplate: “Jalsa”. A crowd crystallises out of nowhere. A bewildered bystander asks, “Kaun aanewala hai?”

A woman, with her arms akimbo, gives Jalsa the once-over, as though speculating, how much will he sell for? Passing cars slow down, the occupants exchange glances: shall we pop in and say hi to Uncle? An oily character attempts to schmooze the guards into letting him pay his pranaams to Jaya Aunty. A Pretty Young Thing bursts out of a tourist cab with clenched fists pumping the air and points dumbly at the wooden gate and the guards say yes he will be here yes here yes right here yes this door only and the girl simpers a series of omigods and clutches her cheeks and tears up.

They discuss possible scenarios for when the Great Old Thespian finally gives his darshan: he’ll sit on top of his wall; he’ll sit in his car and go away; baahar aayega, bye-bye karke jaayega; he isn’t in Bombay, he’s making you ullu.

The divider is buried under bodies. A short girl stands on tiptoe and describes everything that isn’t happening to her shorter friends. A diminutive man curses his mother for not feeding him up as a boy. “Public paagal ho gayi hai, abhi do ghante baaki hai”, claims the man who will cede his vantage point to no-one. “Dekhne ke liye public poora road jam karti hai”, grumbles the gent whose arse is being brushed by passing rear-view mirrors.

A young chap screams “Woh dekho aaya aaya!” and everyone jerks and hoots and screams. Bodies press forward. An unidentified baby’s head lolls on The Scribe’s shoulder while its progenitor jumps up and down. But He hasn’t come and we are broken and we pounce upon the Boy Who Cried Bachchan.

A nobody emerges from the wicket-gate and we hate him for actually having been inside. A Go-Pro soars into sight from behind it and our army roars its presence. My neighbour announces, “Abhi toh entry honi hi hai”. An official photographer scales the monsoon scaffolding and captures images of a Bachchan lookalike dressed as Anthony Gonsalves, waving a cutout of the legend’s Bunty Aur Babli avatar.

A Mumbai Darshan bus, inching by, stops momentarily, and we on the divider pummel its windows with our palms until it has moved enough for us to see that Amitabh Bachchan still isn’t here. One man is so overwrought, he begins chewing on his cellphone.

And the gates swing open and there he is. The crowd explodes and raises its arms and a thousand flashes illuminate the familiar center-parting, spectacles, French beard, kurta-pyjama, Nehru jacket, and smile. He joins his hands above his head in a namaste. Points to the screeching hordes vying for his attention across the paralysed street and waves. Then nods at security and the gates shut and he is gone. All in thirty seconds.

I’d waited three hours and had come to lampoon the crowd but I found my hand waving too. I’m no Bachchan devotee. I like his earlier work before the Young Man became Angry and the roles that tapped his underutilised comic potential. But this man quizzed me for years, reassured me that Dairy Milks were safe to eat again, and voiced the secret song that I sing to soothe myself on inexplicably troubled afternoons.

Mr. Bachchan, if you’re reading this, it was nice seeing you.By arrangement with thecitystory.com