Thalaivi, a trilingual directed by A.L Vijay, the film is based on the life and times of Jayalalithaa aka Amma. 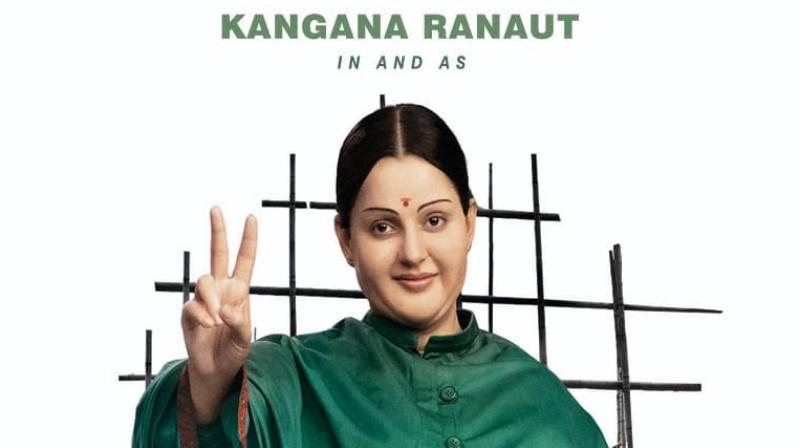 Kangana Ranaut as Jayalalithaa in Thalaivi.

Mumbai: Ever since it’s an announcement, Kangana Ranaut starrer Thalaivi has created a furore amongst audiences. Thalaivi, a trilingual directed by A.L Vijay, the film is based on the life and times of Jayalalithaa - the most celebrated female actor-politician ever lived. From learning Tamil, Bharatnatyam to sitting through arduous prosthetics sessions, Kangana has been leaving no stone unturned in preparation for the role.

The makers of the film have now released the first look teaser of the film, which show Kangana in two distinct looks in and as Thalaivi. Kangana Ranaut has gone a complete transformation and nailed both Jayalalithaa’s look and body language. The first look teaser shows the early years of Jayalalithaa’s career when she was a superstar heroine, and the focus then shifts to her years as a politician, a look that everyone had been eagerly waiting for.

Kangana Ranaut has once again gotten completely into the skin of the character and is almost unrecognizable. Not only are her dance moves as the younger Jayalalithaa on point, but she has also nailed the aura and commanding personality as the legendary politician. As soon as the look was shared, the internet erupted with praise, and can’t stop raving about the poster and teaser.

Producer Vishnu Vardhan Induri, who is also producing 83, says, “I am excited to show this story of an actor turn politician, which is based on one of India’s most loved and followed public figures. Thalaivi is a very dear project to all of us as it is a story that needs to be told. And the way, Kangana has slipped into the character, is simply amazing. Can't wait to present this film to the audience."

After producing Judgementall Hai Kya, producer Shaailesh R Singh is proud to associate with Thalaivi, ‘’I’m happy to collaborate with Kangana yet again after Tanu Weds Manu and Judgemental Hai Kya. There couldn’t have been anyone other than Kangana to ace and portray this legendary public figure! We can’t wait to showcase her incredible journey to the world on 26th June 2020.”

Produced by Vishnu Vardhan Iduri and Shaailesh R Singh and directed by Vijay, Thalaivi is scheduled to release in Hindi, Tamil and Telugu on 26th June 2020.