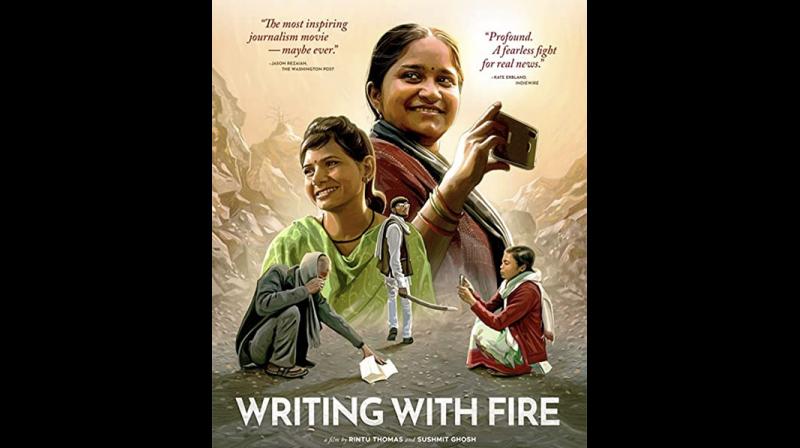 Poster of the documentary 'Writing with Fire'. (Photo: Twitter/@RintuThomas11)

New Delhi: Indian documentary 'Writing with Fire' has been selected in the Best Documentary Feature category in the Oscars 2022.

As the Oscars 2022 ceremony is scheduled for March 27, the Academy of Motion Picture Arts and Sciences on Wednesday revealed its shortlists in 10 categories.

While India's official entry, 'Koozhangal' (Pebbles), is out of the race, Delhi-based filmmaker duo Rintu Thomas and Sushmit Ghosh-directed documentary 'Writing with Fire' has been shortlisted among 15 films, selected from a pool of 138 films, in the Documentary Feature category of the 94th Academy Awards.

Other films in the category also include 'Ascension', 'Attica', 'Billie Eilish: The World's a Little Blurry', 'Faya Dayi', 'The First Wave', 'Flee', 'In the Same Breath', 'Julia', 'President', 'Procession', 'The Rescue', 'Simple as Water', 'Summer of Soul (...Or, When the Revolution Could Not Be Televised)', 'The Velvet Underground'.

'Writing with Fire' is Rintu Thomas and Sushmit Ghosh's debut feature documentary about a newspaper 'Khabar Lahariya' started as a social experiment by an NGO. It is India's only rural newspaper run by Dalit women since 2002, started by Delhi-based NGO Nirantar from Chitrakoot in the Bundelkhand region.

It is published across Uttar Pradesh and Bihar in rural dialects of Hindi, including Bundeli and Awadhi. Khabar Lahariya is India's only women-run brand of ethical and independent rural news. Today, it reaches 5 million people every month through multiple digital platforms.

The feature documentary captures 'Khabar Lahariya's switch from print to digital in recent years. It follows how the newspaper's Chief reporter Meera and her journalists break traditions, redefining what it means to be powerful by reporting India's biggest issues and within the confines of their own homes, questioning notions of patriarchy and redefining power, investigating local police-force incompetence, listening in and standing by victims of caste and gender violence.

'Writing with Fire' has also won 28 international awards including Sundance Film Festival in January, where it won two awards: Special Jury (Impact for Change) and Audience awards at the World Cinema Documentary competition.

The nominations voting for the Oscars 2022 will run from January 27 to February 1, and nominations will be announced on February 8.

The 94th Academy Awards are slated to be held on March 27 at the Dolby Theatre.