See Pics: Not only SRK, Priyanka Chopra also flaunts her love for camouflage

Priyanka Chopra is currently busy with the promotions of her second Hollywood movie ‘A Kid Like Jake’. 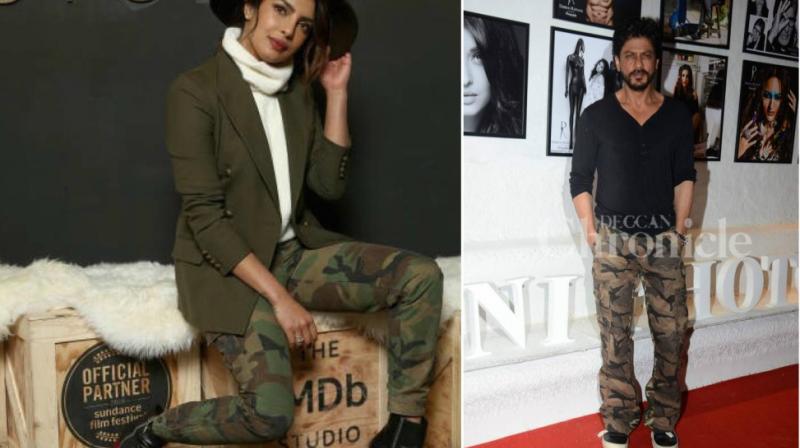 Mumbai: Shah Rukh Khan’s love for camouflage isn’t something that’s hidden. He is often seen wearing the same no matter what the occasion is. The next person to do so is Priyanka Chopra, who is currently busy with the promotions of her second Hollywood movie ‘A Kid Like Jake’.

The actress sported a camouflage at the movie’s promotions at Sundance Film Festival.

PeeCee was seen donning a pair of military pants by Ralph Lauren, which she paired with a white polo neck top by Michelle Mason. She also added on a military green blazer and completed the look with black boots by Louis Vuitton. During the promotions, the actress was also seen bonding with ‘The Big Bang Theory’ actor Jim Parsons alias Sheldon Cooper. Here are the photos:

In real life, Shah Rukh Khan and Priyanka Chopra grew very close during the shooting of their movies ‘Don’ and ‘Don 2’. Rumours even went on to suggest that SRK and PeeCee got married in Dubai. Prior to this, Piggy Chops even pointed out that she had wore an ex’s jacket at the interview she was in. Yes you guessed it. The reports suggest she hinted at SRK.

Things might have turned so ugly between the two that Priyanka reportedly had to give up on her role in Rakesh Sharma biopic. Farhan Akhtar had earlier announced ‘Don 3’ is in the pipeline too, but can it bring Shah Rukh and Priyanka back on screen? That seems highly unlikely now, doesn’t it?