Never too late for companionship

Khan’s first two marriages ended in a divorce. He first married Jemima Goldsmith, daughter of a British billionaire, in 1995. 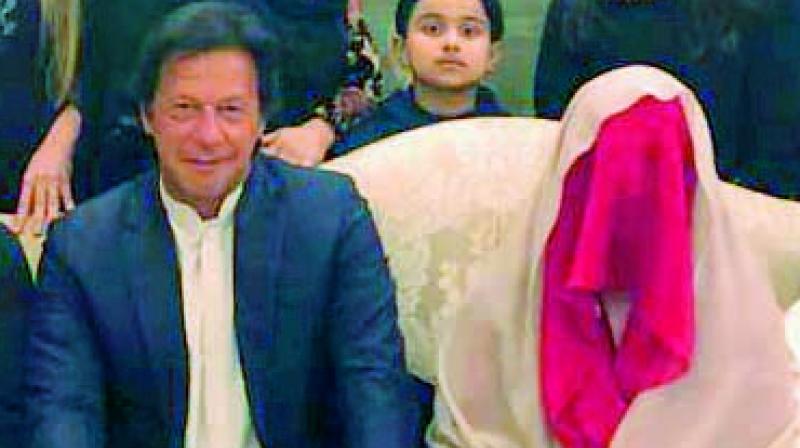 Social media went into a tizzy as soon as news of former Pakistani skipper Imran Khan tying the knot for the third time emerged on Sunday. The 65-year-old sportsman-turned-politician married his spiritual adviser and mother of five, Bushra Maneka, in the presence of close friends and family.

While Imran was trolled over his third marriage on social media, the world seemed to have ignored that there’s nothing wrong in seeking companionship even after a bunch of failed marriages.

Khan’s first two marriages ended in a divorce. He first married Jemima Goldsmith, daughter of a British billionaire, in 1995. The couple had two sons together and the marriage lasted for nine years. Khan then married British TV anchor Reham Khan in 2015, but it hardly lasted 10 months.

And he is not alone! Back home, too, we have the likes of superstar Kamal Haasan, who has married thrice; politicians Digvijay Singh, Shashi Tharoor and NT Rama Rao have all married more than once. Bollywood celebrities Sanjay Dutt, Siddharth Roy Kapur, Karan Singh Grover, Vidhu Vinod Chopra and Adnan Sami to name a few have all married thrice.

For cricketer Shikhar Dhawan’s wife Ayesha Mukherjee, this will be her second marriage. She was married to an Australian bussinessman, but the couple got divorced. Ayesha has two daughters from her first marriage – Rhea and Aliyah.

According to relationship expert Nisha Jamvwal, it’s absolutely human to continue to seek a companion after failed relationships or after a certain age. “Even after a partner passes away or if one chooses to move on and marry again within a span of three months, it’s normal. One needs to fill the void, it’s human and there’s nothing wrong with it,” she explains.

“Marriage is all about companionship — physical, emotional and intellectual. As people grow older, in their 30s or 40s, they seek companionship, not materialistic passions. In fact, it has been observed that second or third marriages are often more successful, as both the partners are the right age and mature enough to handle things,” Nisha reasons.

Do age and sex matter?

In small towns or in tier-II cities, only men may have the advantage of getting more suitors if they choose to remarry, but in metros, both the sexes have equal opportunity, feels Nisha. “There are so many single and divorced clubs in cities where people get to meet like-minded partners for a possible union,” she states.

When it comes to the psyche of men and women, they differ while choosing partners. “Men look for both a physical and an intellectual relationship while women look for security and friendship,” says Nisha.

Relationship expert Srikanth Acharya adds, “Men are sensitive and insecure because of their biological make-up and coping mechanisms. They need constant support from a significant other in their life and that’s why they remarry. Sometimes, they have extramarital affairs when they do not get the support from their wives. They crave for a new relationship easily. Men also remarry to show off that they are still masculine, powerful and attractive too.”

Actress-singer Suchitra Krishnamoorthi feels that the older one gets, the more one needs a companion. “I don’t find anything wrong in seeking a partner after a certain age. A female relative got married at 74 recently,” she shares.

Relationship expert Magandeep Singh chips in, “It’s less taboo for men to marry or date a young partner; however people find it difficult to accept an older woman marrying a younger man. This is one reason why you see more men remarrying and not women. A 44-year-old man marrying a 28-year-old woman is fine in the society, but when a woman does the same, they question her. That’s not the right attitude. Meanwhile, having already experienced failures in relationships in the past, older women are more specific about their choices and do not settle easily; they want a mature guy. When men touch their 50s, they are less childish, have less ego issues and are calmer. So they want to give marriage another shot. However, the success rate of remarrying so often is also low.”

It is always great to have someone beside you to share life’s ups and downs, feels the owner of Bani’s Creations, Bani Ahuja, who also decided to remarry. “I am really happy for Imran Khan who found love and companionship again. But finding a companion is one thing and going ahead with the relationship and formalising it is another. In our society, it is difficult to embrace change. People always think about what the society will say, even before acknowledging their feelings,” she comments.

According to writer and poetess Sherry Javeri, getting married makes more sense than keeping a mistress. “I really appreciate the fact that Imran married the woman he was dating. Islam encourages the remarriage of a widow and there’s no bias between a man and a woman who want to marry more than once,” she says.

“If Imran were from India, I would have happily sent him a marriage proposal,” laughs Sherry.