Sooryavanshi to have theatrical release 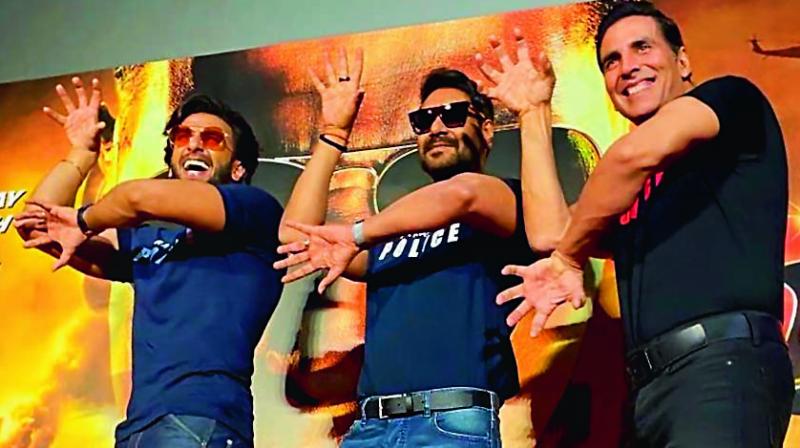 Rohit Shetty’s upcoming film Sooryavanshi does not plan to release on an OTT and is apparently awaiting its theatrical release. This is despite the release having got postponed once because of the pandemic outbreak.

As per sources, the main reason cited for the preference for the theatrical release is the budget of the film, which is very high.

“The film’s budget is approximately `400 crore as it has been shot at different foreign locations,” a source explains and adds, “The unit had to use helicopters, had high-action scenes and was shot in plush locations all across, as director Rohit Shetty never compromises with locations and its budget.”

However, this means the film may release in the month of October. The delay, however, hasn’t dipped the enthusiasm of the unit members, for we hear that even the technicians of the film unit are looking forward for its theatrical release.The huge number of single theatres being shut down may certainly be unfavourable for the production house.

Yet, one is also not certain if, when the multiplexes would open, people will throng into the cinema halls. “Owing to the fear of coronavirus, it is expected that people may refrain entering places such as the movie theatres.

But we are wishing that everything goes well and Sooryavanshi releases soon as it’s a film scrupulously made for theatres only,” one of our sources informs.

Rohit for all and all for him

Everybody in the unit is all praise for Rohit Shetty. One source tells us how everyone considers Rohit a man for every small worker from his unit.

“Whether it is anyone unwell or another who meets with an accident, Rohitji makes it a point to go with the individual and personally aid him with the medications,” says the source. “He does not carry around him the airs of being a producer.”

The source then goes on to share with us an incident when the brother of one of the spot boys in the unit fell seriously ill.

“Rohitji booked air tickets for him to travel from Hyderabad to Mumbai,” the source tells us excitedly. “Also, Rohitji is a man for the technicians and daily wagers because he never delays their payments. Sometimes, he has had to delay payments towards equipment, but never has he kept any person’s money pending at all.”

It’s probably no wonder that even though the technicians of the Sooryavanshi team are waiting impatiently to watch the film, they envisage nothing but a grand release for it, one that has all the celebrations and grandiose of a theatrical release. Towards this end, we wish the team the best.