Never been part of a film like Manmarziyaan, says Abhishek Bachchan

The actor who took time to get back to the silver screen was reassessing his strengths and weaknesses. 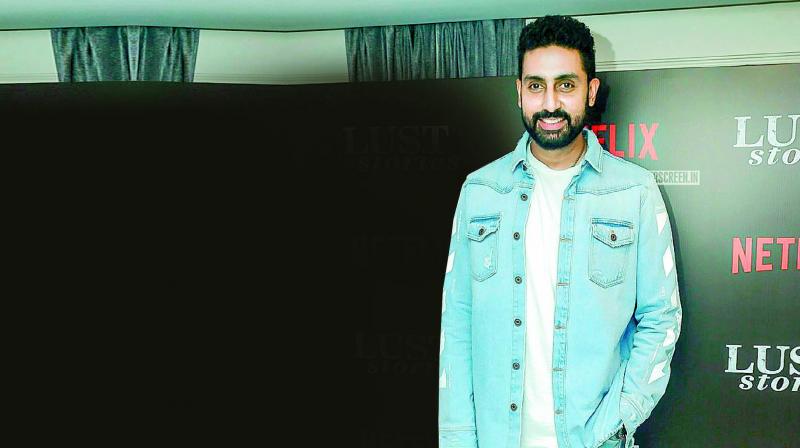 The newly-rejuvenated Abhishek Bachchan is back in action. With his so-called comeback film, Manmariziyaan, all set to release, the actor talks about the film and what he perceives to be his second innings in Bollywood.

Abhishek, why this prolonged hiatus?
I think I needed to step back and examine the quality of work that I want to do in the future. It was a time of….

Churning?
I wouldn’t say churning, I’d say revaluation, reassessment. During my hiatus, I took stock of my strengths and weaknesses, and I zeroed in on the kind of work that I wanted to do. Of course, I’ve made a lot of mistakes, and I won’t repeat them. But I won’t shy away from making new mistakes. I have a bright new team to help me.

How did Manmarziyaan become your first film, post-reassessment?
It was not planned. Manmarziyaan just fell into my lap. Aanand Rai, whom I’ve known for years, asked me if I wanted to do a film with him. I’ve always liked Aanand’s work, so I immediately agreed to hear the script. Aanand sent the writer, Kannika Dhillon, to narrate the script, and in our first meeting, I was convinced that I wanted to do the film. Kannika had so much confidence in her script and her characters. She wasn’t dazzled by the idea of getting stars to do the film.

Apparently, Kannika had already zeroed in on you, Vicky Kaushal and Taapsee Pannu to play the three leads of Manmarziyaan.
I’d like to believe that. Vicky and Taapsee were already on board before I came on. When I was considering taking up the project, I wasn’t sure who the director was — Aanand Rai or Kannika Dhillon? I then found out that the film would be directed by Anurag Kashyap. “Ok, interesting,” I thought.

Were you looking forward to working with Kashyap?
His films, no matter how dark, are always something above the ordinary. This time, Anurag hasn’t made a dark film. Manmarziyaan is a light, happy film. It was a new experience for both Anurag and me. In many ways, we were both exploring new facets of our personality through the film.

Now that the film’s been completed, are you as happy as you were when you started out?
Even happier. I’ve never played any character like Robbie, and I’ve never been part of a film like Manmarziyaan. I love the way Anurag has used silence in the film. I’ve always believed that a performance is bolstered not by dialogues, but by what’s left unspoken.

Anurag is so happy with your performance that he has signed you for another film – this time with your wife.
You mean Gulab Jamun? Anurag is only producing it, the film’s being directed by a new director called Sarvesh Mewara. That one’s a little way off. I’m doing another film before Gulab Jamun, which I am not at liberty to talk about. But yes, Gulab Jamun is as sweet a film as it sounds, and it’s always a pleasure to work with the missus. Every time we’ve done a film together, it’s been special. I am confident that Gulab Jamun will also be a treat.

What about Dhoom 4?
What about it? Neither have I been approached for Dhoom 4, nor do I have any information about it. Until Adi (producer Aditya Chopra) tells me about it, I have no idea.