Anupam used to ridicule me at NSD before we became friends, says Govind Namdev

Every year for ten days, veteran actor Govind Namdev comes to Delhi to ‘give something back to his alma mater’. 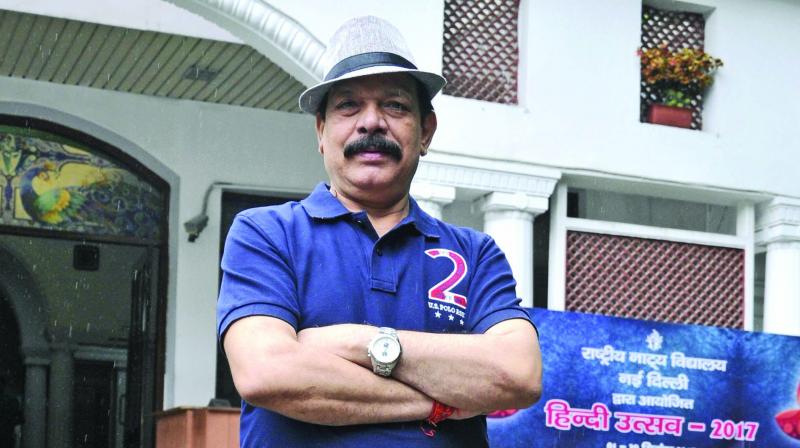 Between taking classes, veteran actor Govind Namdev sits with us at the reception of his alma mater, National School of Drama (NSD). As staff members and students cross us, they all greet him, some even touch his feet. That’s the kind of reverence he enjoys here and probably that’s what makes him return year after year to hold a theatre workshop for budding actors. “All that I learnt here, I want to give back. I had the most incredible time here,” he says.

Talking about his life at the premiere drama school of the country, the actor who hails from a small town in Madhya Pradesh, recalls, “I met the likes of Anupam Kher, Satish Kaushik, Anang Desai, Anita Kanwar and others at NSD and found everyone to be conversing in English. I didn’t understand the language and as a result I became a backbencher. Then I began to miss classes and one day decided to run away from the institute. At the gate, our then director Ebrahim Alkazi stopped me and called me to his office. When in his broken Hindi, he sympathetically asked me why I was leaving, I broke down and narrated him my litany of woes. He then told me that art and craft of dance, music, makeup, voice modulation etc don’t need a language. He even called the professors and directed them to explain me the lessons in Hindi. That day changed my life and I too began to give my 100 per cent and gradually became a first bencher,” he reminisces.

He also narrates how his batchmates gave him a hard time before becoming his friends. He says, “Because of my background, my voice tone was a bit harsh and loud and they all considered me a jahil (illiterate) and used to shut me up. In the first three months, they ridiculed me a lot and so I began to stay away from them. Anupam and Anang, who later became my roommates, were immensely good-looking convent-educated people. I suffered from inferiority complex but when my performance improved, they started respecting me and we became best of friends.”

Talking about the fun times, he says, “When we used to get fed-up with the mess food, we would dress up and gatecrash weddings. Also we used to hang out at Coffee House in CP.”

Unlike the likes of Anupam and Satish, he didn’t head to Mumbai after graduation but stayed on to work in NSD’s repertory company for more than a decade. He says, “I was deeply inspired and impressed with the performances of the repertory company actors and that’s why I stayed on. I thought my work in theatre will get me film offers and at that time filmmakers like Shyam Benegal, Govind Nihalani, Rajkumar Santoshi and Basu Chatterjee used to promote the talent in theatre. By 1988, the directors began to offer me roles and in 1990, I quit the repertory company and left for Mumbai.”

Namdev has played pivotal characters in both critically acclaimed and commercially hit films. “Bandit Queen, Prem Granth, Virasat, Satya, Kachche Dhaage, Godmother, Lajja, Sarfarosh, Oh! My God, Wanted, Singham… all got me great appreciation and gave me satisfaction as an actor. I’ve been working for 27 years and I still have my kitty full of films. Three-four of my films will release before the end of this year,” he says, checking his watch for his next class.

About his favourite genre of roles, he says, “In Hindi cinema, three characters are most important — hero, heroine and the villain. I couldn’t be the first two, so I chose to be the third.”

Though busy with films and TV, he has chosen the medium of academics — teaching at NSD, Mumbai University, MP School of Drama and supervising his theatre troupe in MP mostly via WhatsApp calls — to stay connected to theatre. But he refuses to put any one medium above the other. “TV, films, theatre… they all taught me something. They all are equally important,” he says before signing off.