Entertainment   Bollywood  24 Sep 2017  Golmaal is a pension plan for all of us, says Ajay Devgn
Entertainment, Bollywood

Golmaal is a pension plan for all of us, says Ajay Devgn

“We can only work hard,” Ajay Devgn said at the launch of trailer launch of the movie. 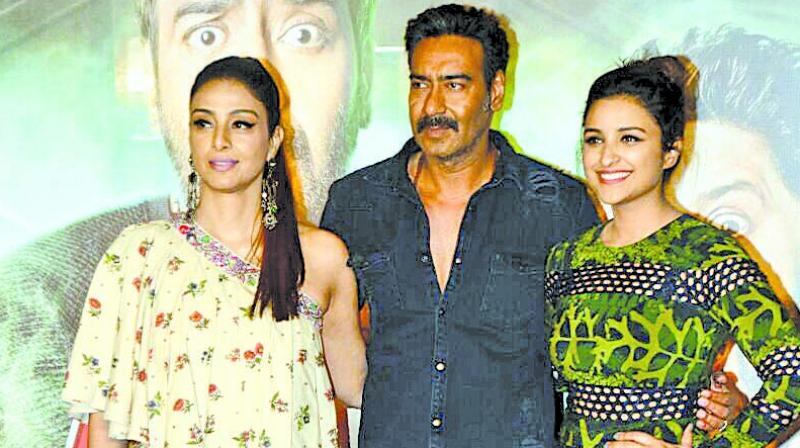 Rohit Shetty’s much-awaited Golmaal franchise is only getting bigger and better with each of its instalments. While the audience eagerly awaits each movie, the film’s star cast jokes that the Golmaal series is a pension plan.

“We can only work hard,” Ajay Devgn said at the launch of trailer launch of the movie. “Only Rohit can decide about how many instalments you can have. But yes, this is a pension plan for all of us.” Tusshar Kapoor added, “For me, it’s like family; it’s like a paid vacation. We keep asking Rohit when he’ll make the next movie.”

Tabu, known for her offbeat cinema, is a new addition to the team, and she said, “Everybody around me was so chill that nobody took themselves — and me — seriously. And that’s why I enjoyed myself. I was waiting to get an experience of this kind, personally and professionally. I didn’t have to think what I had to do.”

She adds, “Like the guys said, Golmaal is a very special film, and it’s also my pension plan. Whenever I have watched Golmaal, I have laughed my heart out. When I spoke to Rohit, once he said yes there’s a script, I didn’t even feel the need to read it. This is the first film I’ve not used any glycerine. I am so happy, I’ve only had a laugh riot throughout. It was actually like a picnic.”

The launch was abuzz with the fact that Ajay and team gave a tough time to even Parineeti Chopra, with their random pranks. She said. “I don’t remember a single day there wasn’t a prank. These five boys and Rohit sir spent time and money to prank me. There is a separate pranks department. Ajay sir is the most dangerous guy. You have to constantly check if he’s around and doing something. I have become a stronger person now.”

Adds Ajay, “We don’t plan any pranks; they happen spontaneously. We keep looking on the sets. And I’m talking about everyone. We all fell into this trap somehow.”

So, how many cars do we see being blown up in this film? “Actually, we had planned to blow up cars, but we stopped after the GST,” laughed Ajay.