Acting is not my calling, direction is: Kangana Ranaut

The upcoming period film, Manikarnika: The Queen of Jhansi is co-directed by Krish and Kangana. 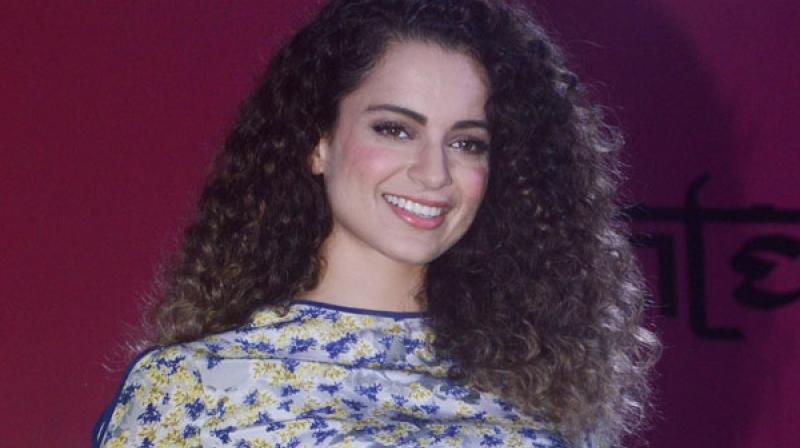 Mumbai: Manikarnika: The Queen of Jhansi, is one movie that has been in news ever since it was announced. The period film, stars Kangana Ranaut in the titular role and it is co-directed by Krish and Kangana, has substantial buzz surrounding its release, thanks to its mammoth scale and a mass-appealing subject. The trailer of the movie has caught the attention of one and all people cannot stop raving about it.

Another thing that has been the talk of the town is that Kangana Ranaut has donned the hat of co-director with this movie. Kangana is one of the few actresses that we have in Bollywood that have carried the weight of the entire movie on her shoulders and emerged victorious. Her performance in movies such as Fashion, Queen and Tanu Weds Manu franchise has won her many accolades.

Talking about her experience as a director, Kangana said, “I always wanted to direct films. These days, you generally hear of directors wanting to be actors, and not the other way around. Even those actors who direct don’t really do it full-time. They feel that they have got a certain amount of acclaim and popularity as actors, so why should they give that up and only direct films. It may sound strange, but I have never really identified with being an actress. It’s not my calling, direction is.”

She went on to elaborate on how comfortable she felt being a director, “It’s actually surprising even to me how comfortable I feel being a director on set, even when I am sweating buckets and am surrounded by 500 people and everyone’s screaming at the same time! There’s something about directing a film that’s so gratifying, even though it’s a worker’s life. An actor is just one part of the whole orchestra of filmmaking and it kind of makes me feel inadequate, that I am not doing enough as a creative person”.

“It’s not that I don’t want to act in films with other directors — I am doing Ashwiny’s (Iyer Tiwari) Panga and Prakash’s film (Kovelamudi, called Mental Hai Kya) right now. I like acting, but I always felt a part of me was dying somewhere because I wasn’t being utilised totally. I felt like a part of me was rotting away because I wasn’t being able to express myself as a director. When I was just an actor on this film, I didn’t know what was happening with the rest of the film and it was frustrating. A lot of mishaps happened on set… I injured myself several times, I broke my forehead and I was worried about how I would take this forward as an actor. But when I got down to directing, there was no pressure… there were only goals. For me, the director is the hero of a film and directing is my first love,” she added.

Kangana also mentioned that being just an actor in a movie is a relief as it is a small part of a huge canvas. She says, “Honestly, it’s actually a relief to just be an actor… to be a small part of a huge canvas. Acting, for me, is actually like a holiday (laughs). I can sit prettily in my van and go out only when I am called for my shot, I don’t have to bother about anything else. When I was shooting Panga, I was so busy with the VFX of Manikarnika that I was constantly Facetiming with my team. Imagine how overrated actors are! I could actually do a full-fledged role as an actor and I had so much time that I did the entire VFX work of an epic film alongside!”

She added, “And yet, actors behave like they are carrying the burden of the world on their shoulders… so, so overrated. Acting involves doing absolutely nothing and that kind of superficial involvement always hurt me. I don’t come from a film family and I don’t have a platform set out for me where I can stand and make tall announcements like, ‘I want to be a director’. It’s happened organically. I still ask Prasoon Sir that what made him think I could direct when even I didn’t know I could do it.

Being an actor doesn’t interfere with what I want to do as a director and vice-versa. As an actor, I am happy to be a part of someone else’s vision. If you ask me whether the films I am doing as an actor stimulate me as a director, then the answer would be, ‘Not at all’. What Ashwiny is doing with Panga is a reflection of who she is as a mother and a wife. I don’t know that world because I am not married and I don’t have children-related issues (smiles). Mental Hai Kya is a thriller, it’s a mad ride and as a director, thriller as a genre doesn’t excite me. But to be part of it as an actor is so gratifying”.

Manikarnika: The Queen of Jhansi is being produced by Zee Studios and Kamal Jain and will be releasing on January 25.