I don’t want to restrict myself as an actor, says Bobby Deol

The actor who has Salman Khan to thank for his comeback into Bollywood reveals that the superstar had advised Bobby to take up solo projects. 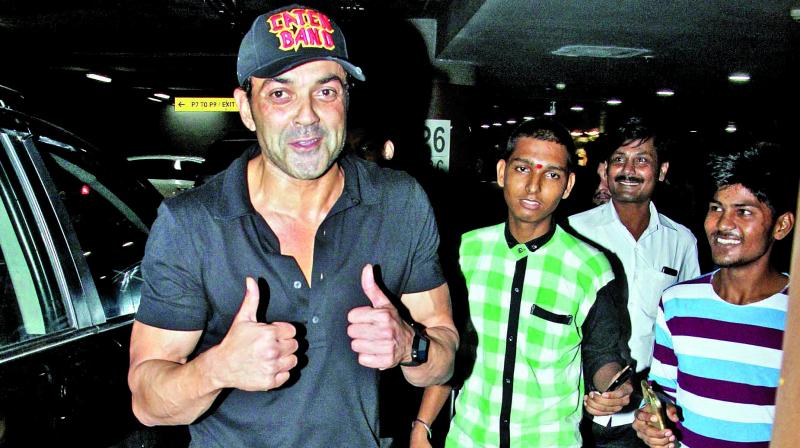 Bobby Deol started his Bollywood journey with Barsaat in 1995 where he was paired opposite Twinkle Khanna. Directed by Rajkumar Santoshi, the film won him Filmfare Best Debut Award. In the subsequent years, he gave several commercial successes including Gupt, Soldier, Badal, Ajnabee among others. However, the actor’s career saw some real lows in recent times. Bobby was seen again in action last year in Salman Khan’s Race 3. However, the film was trolled more than anything else but the actor says he has seen some really tough times and trolling doesn’t get to him at all. “I have seen such bad times that trolling doesn’t affect me. Besides, what is trolling? It is not a bad thing, it is just the freedom of speech. Everybody has an opinion, so what do you do about it? You can’t change people’s opinion. It’s the part and parcel,” says the actor who is all set to ring in his 50th birthday this Sunday and finds aging not scary. He sees himself more energised and focused at this stage. “I don’t see turning 50 as scary. I only wonder how the time has flown by so fast; suddenly I am 50 now,” says Bobby and adds, “I think I am more fit, energised and focused in my life at 50 than I have been earlier. So, it’s great to be 50.”

Sharing his birthday plans, he says, “It’s a special birthday because so much importance is given to the ‘50th birthday’. For me, just being with my family makes it special... My family is coming down from American only to celebrate my birthday. I just want to be with them.”

The actor who has Salman Khan to thank for his comeback into Bollywood reveals that the superstar had advised Bobby to take up solo projects. Bobby says, “Salman always believes in his people. I would love to do solo projects, I have reached that age where I can do so much more and not just play the lead. There are so many parts that are interesting to play, I don’t want to restrict myself.” He adds, “It’s like I am beginning my career again and it will not happen overnight.”

“I think if I can inspire people by changing myself, it would make me feel good about myself. I believe it is never too late to do anything in life ever. Look at my father, he is 83 and still shooting. So, I believe, if you are fit, you can achieve anything in life. It is amazing how I have worked so far and how things have changed for me in the last year. I just have to believe in myself,” says the actor.

Last year has been particularly bad with all the Khans’ films bombing at the box office. How difficult is it to be relevant? “I was someone whose career had stopped and I wasn’t relevant for so many years. But there is some importance now and people are thinking about me. So, I am excited with the way my life is turning around. I can only say that every actor has to go through insecurities and situations where suddenly things just don’t work the right way for them but one can’t keep thinking about that. For me, relevance comes from within... only you can inspire yourself.”