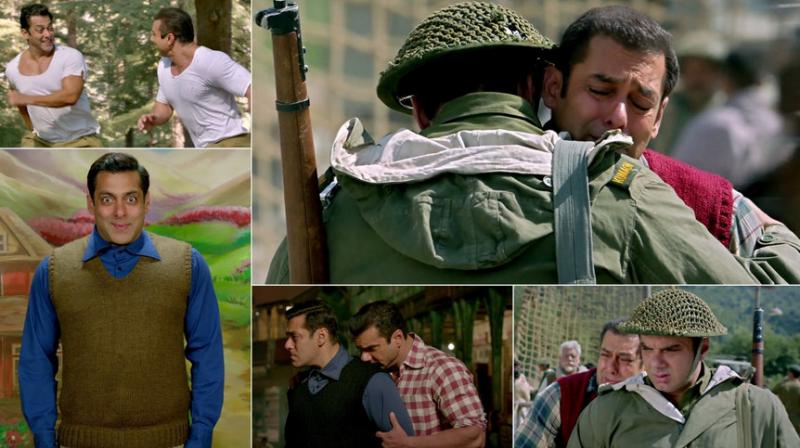 Stills from the trailer.

Mumbai: After teasing the fans with the tidbits of the film, at last 'Tubelight's' trailer got released amidst much fanfare on Thursday.

The teaser was highly appreciated by the audience and Salman Khan fans, followed by the much celebratory song 'The Radio Song'.

However 'Tubelight' trailer had nothing exceptional to showcase.

It's more of a two brother's tale, with Sohail Khan fighting the Indo-China war, and Salman Khan playing the role of a man-child, with exceptional super natural powers.

Salman Khan's emotional side could probably come out with more finesse because of his own brother Sohail Khan starring alongside in the trailer.

The much hyped part about Chinese actress Zhu Zhu in the film, merely had a blink of an eye appearance in the trailer.

Overall, the film is meant to be an out and out Salman Khan film, like his previous ones.

The fans struggling to spot Shah Rukh Khan, will see a glimpse of the superstar in the trailer.

Highlight of the trailer is late veteran Om Puri, who encourages Salman in the film to hope, which is the crux of the film.

When one hope's, nothing is unachievable.

Watch the trailer below: