Entertainment   Bollywood  25 Jun 2017  There are many films I refused, why people talk only about Baahubali: Sridevi
Entertainment, Bollywood

There are many films I refused, why people talk only about Baahubali: Sridevi

The veteran actress says that she had her own reasons for refusing the film, but people blew it out of proportion. 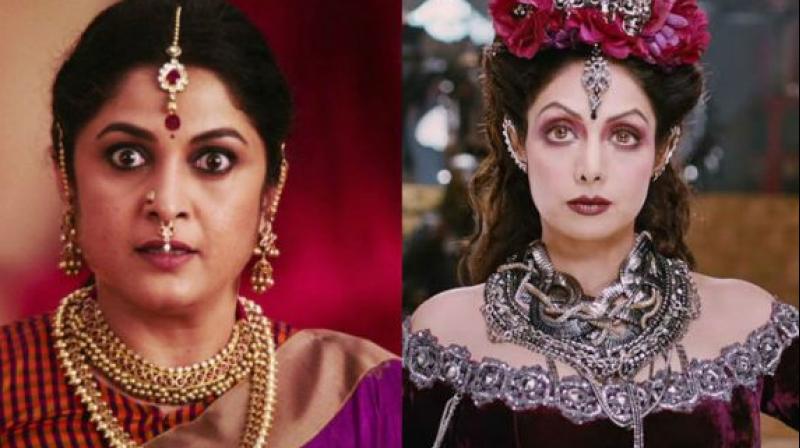 Ramya Krishan in a still from 'Baahubali', Sridevi in 'Puli.'

Mumbai: Sridevi has been raising the anticipation of her upcoming film 'Mom' with some intense trailers and songs.

Sridevi is all set to make a comeback in Bollywood with the film after a gap of five years post 2012 release ‘English Vinglish.’

The actress had also featured in the Tamil film ‘Puli’ starring Vijay in 2015 between the two films, but could also have featured in another South film in the same year with a similar theme, the much more popular ‘Baahubali: The Beginning.’

Sridevi was offered the role of Sivagami, eventually played by Ramya Krishnan, but she turned it down.

Reports claimed that she turned it down because of the low remuneration she was offered for the part.

The actress finally spoke about refusing Sivagami role in a recent interview with journalist Rajeev Masand, though she didn’t mention the reason for taking that decision.

Masand asked Srievi if she had watched the film, to which she replied, “No. To be honest, I didn’t see the movie.”

She then went to on to say, “But I would like to talk about this. It has become such a big issue and people are imagining things [as to why I have said no the film]. I have my own reasons. First of all two parts of Baahubali have come out, and now they are asking me. There are many films, I refused. Why are they not talking about it? Why only this film? I will go there and talk about it.”

Though we would have loved to see Sridevi in a film of the scale of ‘Baahubali’, we also know that she has always been choosy about her characters.

The recent promos of ‘Mom’ suggest that she has made the right choice again.