Entertainment   Bollywood  25 Jul 2019  Hate crimes against minorities and Dalits are on rise in the country: Aparna Sen
Entertainment, Bollywood

Hate crimes against minorities and Dalits are on rise in the country: Aparna Sen

Urging Prime Minister Narendra Modi to intervene Aparna Sen said it has nothing to do with party or politics. 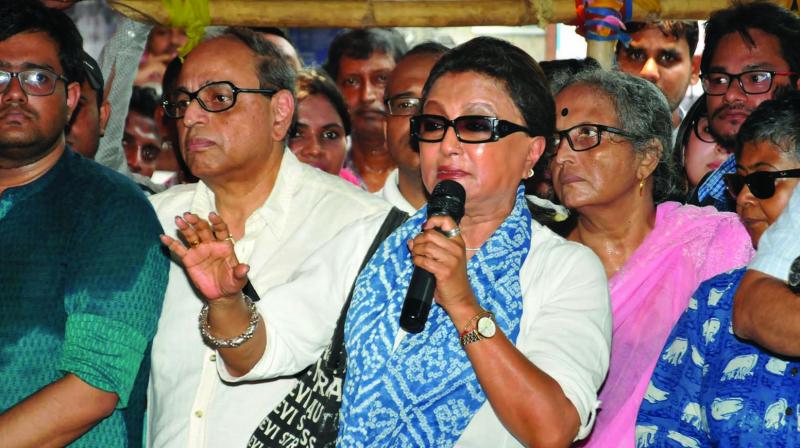 Kolkata: Filmmaker Aparna Sen, one of the 49 signatories of an open letter to Prime Minister Narendra Modi protesting incidents of lynchings in the name of religion on Wednesday alleged that the "secular fabric of our country is being ruined."

Sen at a press conference here said, "We're anxious about the state our country is in today. All over India people are being lynched, why people of different faiths are being forced to say Jai Shri Ram."

Urging Prime Minister Narendra Modi to intervene Aparna Sen said it has nothing to do with party or politics. She said that her concern is not lynching of people from any particular community but the lynching of human beings irrespective of religion.

"Hate crimes against minorities and Dalits are on the rise in the country. No one has the right to brand any of the signatories as anti-nationals. We are raising our voices as secular fabric of our country is being ruined," Sen said.
The actor-filmmaker said it was depressing it is to read cases pertaining to lynching on a daily basis in newspapers.

"Why are people of different faiths being forced to say 'Jai Shri Ram?' How would I as a Hindu feel if forced to say, Allah Hu Akbar? I would resent it. I think people have the right to say Jai Shri Ram, Allah Hu Akhbar, and whatever they wish to say," Aparna Sen said.

The filmmaker also urged the Prime Minister to make lynching a non-bailable offence where the suspects should be given life imprisonment rather than any other punishment. As many as 49 celebrities from different fields including singer Shubha Mudgal, actor Konkona Sen Sharma and filmmakers Shyam Benegal, Anurag Kashyap, and Mani Ratnam, among others, have written an open letter to Modi.

In the letter dated July 23, the celebrities drew the attention of the Prime Minister to a "number of tragic events" including incidents of lynching and said "exemplary punishment" should be meted out "swiftly and surely" in such cases.