Is 'Housefull 5' on the cards? Akshay Kumar reveals details

From Abhishek Bachchan to Kriti Sanon, Chunky Panday to Pooja Hegde, a number of stars were seen flashing big smiles as they posed. 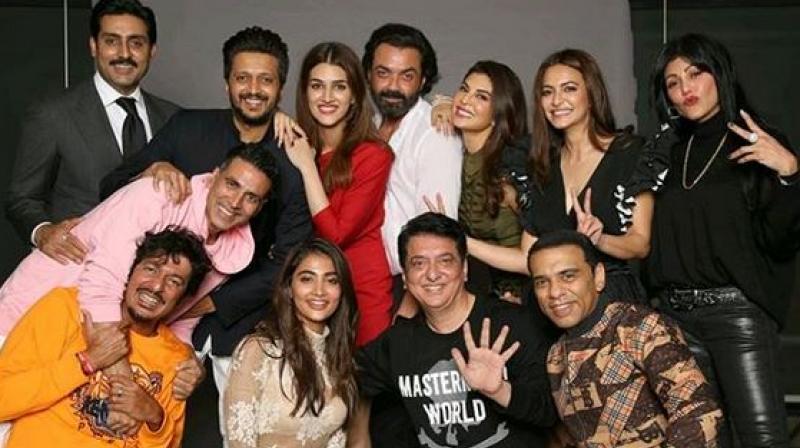 New Delhi: After 'Housefull 4's smashing victory at the box office, the thought of a fifth in the franchise is something that might pop-up in fans' minds. But whether there would be such a feature or not, Akshay Kumar is unaware of it.

Post the success of his latest release 'Housefull 4' which proved a hit at the box office, Akshay Kumar enjoyed a night full of fun with pals from the latest and previous instalments on Sunday and documented it on Instagram.

From Abhishek Bachchan to Kriti Sanon, Chunky Panday to Pooja Hegde, a number of stars were seen flashing big smiles as they posed for the lens.
Commenting on the thought of another 'Housefull' film, the actor wrote "don't know" in the caption.

The multi-starrer 'Housefull 4' opened in theatres on October 25 and hit a century in less than a week of its release. Set around the theme of reincarnation, the Farhad Samji-directorial follows a non-linear narrative as it was set in two times - the 15th century and the present time.

On his work front, the 'Khiladi' star is now set to star in 'Bell Bottom', a film set in the 80s and inspired by true events. He is likely to essay the story of a spy.
He even put out his first look from the upcoming feature earlier this month wherein he is seen wearing a coffee brown suit with dark shades and has sported a big moustache.