After reports of being abandoned last year, Pakeezah actress Geeta Kapoor passes away

Kapoor, who has also acted in Hema Malini-Dharmendra starrer ‘Razia Sultan’, breathed her last at an old age home. 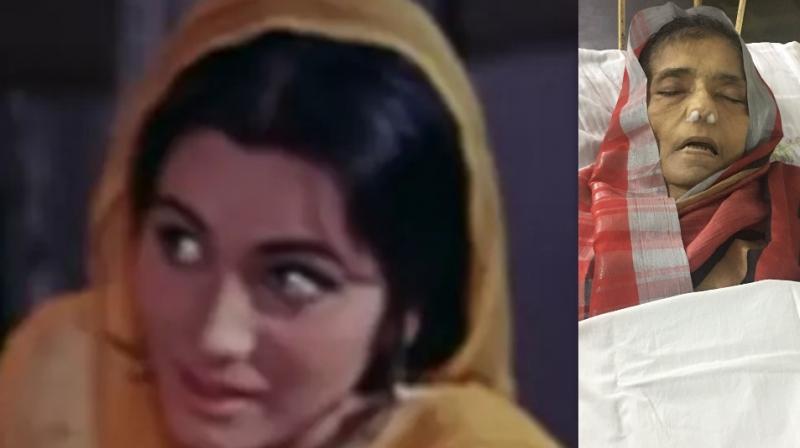 Geeta Kapoor in a still fron ‘Pakeezah’, and on her death bed.

Mumbai: Yesteryear actress Geeta Kapoor of ‘Pakeezah’ fame passed away at an old age home in Mumbai on Saturday.

The news was confirmed by filmmaker Ashoke Pandit.

“Geeta ji finally passed away, we tried our level best to care for her, but she finally gave up. She kept waiting for her children for last one full year, but no one came to meet her. Only last Saturday we had arranged a grand breakfast to cheer her up, she was okay too, but she was not happy from inside, as she wanted to see her children one last time. She had a natural death as she was not keeping well because of her age, she passed away today, around 9.00 AM,” Pandit told Indian Express.

He also took to Twitter, posting videos from beside her mortal remains and of her friends from the old age home and he even shared some of her latest pictures.

Standing besides the dead body of Actress #GeetaKapoor 57 who was abandoned by her kids in #SRVHospital a year back breathed her last at a suburban Old age home today morning. We tried our best to keep her healthy but her wait for her Son&daughter made her weaker day by day. #RIP pic.twitter.com/yCChdzeSEt

#LateActressGeetaKapoor’s friends at the Old Age Home bidding her final Good bye. They all were in tears and under shock. Better than her own kids who abandoned her. An unforgettable & heart wrenching experience of mine. 🙏 #RIP. pic.twitter.com/Spi14ikJBk

He also stated that her body will be kept at Cooper Hospital in Vile Parle for two days in the hope that her son and daughter will visit her and perform her last rites, or else he was ready to go ahead with it.

Her body will be kept at Cooper Hospital Vileparle for two days hoping her Children to come and atleast do the last rites Otherwise We wl do our best to bid her a dignified good bye.. Thank U #DrTripathi SRV Hospital @MumbaiPolice #JivanAshaoldHome for being a great help.🙏 #RIP pic.twitter.com/ZsH48xPg5a

Geeta Kapoor had made headlines around the same time a year ago when reports of her son Raja abandoning her at a hospital surfaced. The actress had reportedly stated that he used to beat her, and later got her admitted to SRV Hospital in Goregaon to which he never returned when the hospital bills started mounting.

Pandit was one of those who helped clear the dues, along with ‘Race 3’ producer Ramesh Taurani, after which she was shifted to an old age home.

Geeta Kapoor had also worked in ‘Razia Sultan’ which also featured Dharmendra. She reportedly claimed to have worked in 100 films, but the number is likely 20-25 according to members of the film industry.