Bhai gets a reality check

Yet, Mirani is sympathetic of Salman’s casting tactic. “Salman’s films usually don’t have much for the heroines. 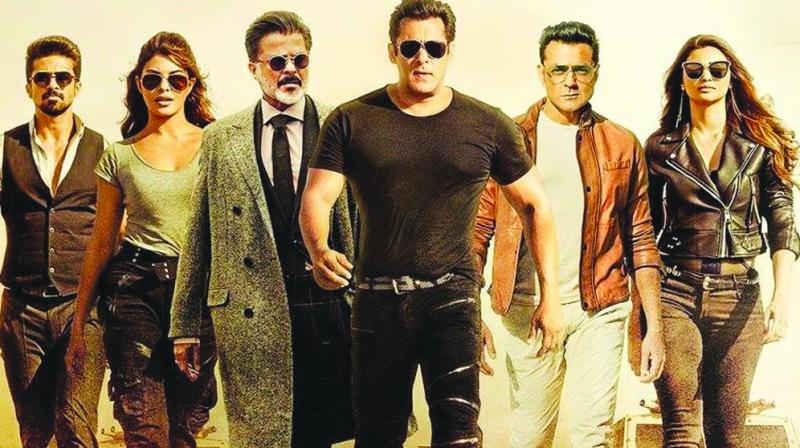 With Race 3 completing a fantastic first week, the fans have now decided to tell their idol that it is time to do better films.

When Salman Khan took to Twitter to thank all those who watched his film Race 3, little did he expect that his fans would respond with the ‘We Don’t Want Dabangg 3’ hashtag.

No matter which film he picks, Salman Khan has always been able to insulate himself from box-office repercussions, all thanks to his fans. This is why despite the scathing reviews, Race 3 sprinted towards the 100-crore club. His fans have time and again proven their loyalty towards the actor, assuring that he stays the only star with each of his film entering the 100-crore club since 2011. That’s a remarkable 12 films at a stretch, discounting the guest appearances. But his fans finally seem to have had enough!

With Race 3 completing a fantastic first week, the fans have now decided to tell their idol that it is time to do better films. And they took to easiest way possible to reach out to Salman — Twitter, the very medium that the actor had used to thank all his fans for watching the film. “I thank every 1 who has gone to see #Race3 in the theaters n each n every 1 individually for watching race n glad that u have liked n appreciated every 1s effort that was put in the movie. God bless sukhi raho n keep watching means a lot (sic),” Salman had tweeted on June 22.

Clearly, the real feedback hadn’t reached him. The fans not only disliked Race 3, now they fear Dabangg 3 will go the same way and started the hashtag “We Don’t Want Dabangg 3” on Twitter on Sunday. Their apprehensions are not unfounded. A lot of the tweets are directed towards Remo D’Souza, Daisy Shah and Saqib Saleem. One such tweet reads, “An honest failure is acceptable but blatant disregard for the audience and well wishers would cause irreparable damage to his reputation. [WE DONT WANT DABANGG3] (sic)”. The grouse is that Salman is working with below-par talent. Dabangg 3 is to be directed by Prabhudheva, who is not quite the darling of the box office at the moment.

“You can be a good actor, but if you wish to be a star you need fans. And his fans have stood by him through a series of bad films since Wanted. But then Bajrangi Bhaijaan and Sultan proved that he is capable of pulling off good cinema if he gets a good director and good story. It is not entirely surprising that his fans want him to look beyond the box office and concentrate on memorable cinema. They are anyway ensuring his films achieve a certain number at the box office. I think it is important that Salman gets this message loud and clear,” says Amod Mehra, trade pundit and distributor.

This is perhaps the first time fans are reaching out, at least in such a vocal manner, to correct a star. History indicates that fans just disappear over time as stars get caught up in indulgence. This is why Salman’s fans are trying to make a concerted effort to ensure his success. “They leave if you do not smarten up,” points senior trade analyst Vinod Mirani.

Yet, Mirani is sympathetic of Salman’s casting tactic. “Salman’s films usually don’t have much for the heroines. When your male cast is expensive it makes sense to have a less expensive girl like Daisy Shah. It is probably a decision made to keep the budget from going top-heavy. But yes, I do understand how the fans feel about it,” he says.

And Mirani is not alone when it comes to understanding why the fans are upset. Senior journalist Bharathi Pradhan says she sees their point. “While the tweets seem orchestrated, considering they all use very similar language and seem to be targeting only Dabangg 3 for some reason, I completely understand why hardcore Salman Khan fans are feeling let down. People love him a lot but he should not take it for granted. Salman should genuinely get out of his ‘jai ho’ syndrome and stop playing the godfather to people. It is detrimental to his career,” says Bharathi.

She also agrees that this is a unique phenomenon wherein a star’s fanbase is trying to correct him. “I was there when Rajesh Khanna lost his stardom. His fans dropped him like a hot potato. So it is amazing that Salman’s fans are actually trying to guide him. I hope he gets the message. I am sure, Salim Khan, who is a very strong influence in his life, will bring an end to this godfatherly attitude and show Salman the right way,” Bharathi adds.

Amod, however, believes Salman may have already seen this coming. “He has already, although subtly, indicated that there is Bharat before Dabangg 3 and the fans should have nothing to complain about Bharat,” he says.

Would Salman change the course of his career for his fans? That would be a 100-crore question for sure. We tried reaching out to Arbaaz Khan as well as Daisy Shah to know what they feel, but our texts went unanswered. Salman is presently in the United States for his Dabangg Reloaded Tour, with Katrina Kaif, Sonakshi Sinha and others.

Salman is said to be working towards starting his own talent management company. And these actors would probably be signed by his company. Under such conditions, it would be important that he signs them for his own films. This is a real catch-22 situation and we are hoping Salman figures out how to get out of it!

“I felt like Race3 was 1take movie. No retake. Don’t want this to happen again. I’ve watched your each film thrice in a theatre but last year TL & this Eid Race3 I saw only once. TL was good atleast there was Salman. But in Race3 you did cameo WE DONT WANT DABANGG3”  —SonalSalmanK

“We want quality films from you and not mediocre films like Race 3, Jai Ho. It's only damaging your reputation and filmography. Please drop the idea of making Dabangg-3 and Sher khan.   We Don’t Want Dabangg3” —5eingVaibhav

“We Don’t Want Dabangg3 if you make another Dabangg3 thn it will be another disaster like Race3 . We want our superstars each & every movie should be blockbuster. so pls work with well known directors . No Mre Dabangg 3, Dancing Daddy type movies” — IAmTheSalmanFan

“Be it trailer, music, supporting cast, director.. Everything was bad about Race3, yet your fans went and watch the movie only for you @BeingSalmanKhan and made it cross 100cr+ in flat 3 days. That's our love for you. Please consider our requests We don’t want dabangg3”
—h_hazra