On one of the promotional events for the film tried a ‘Fire Paan’ and was completely surprised after trying out this street delicacy. 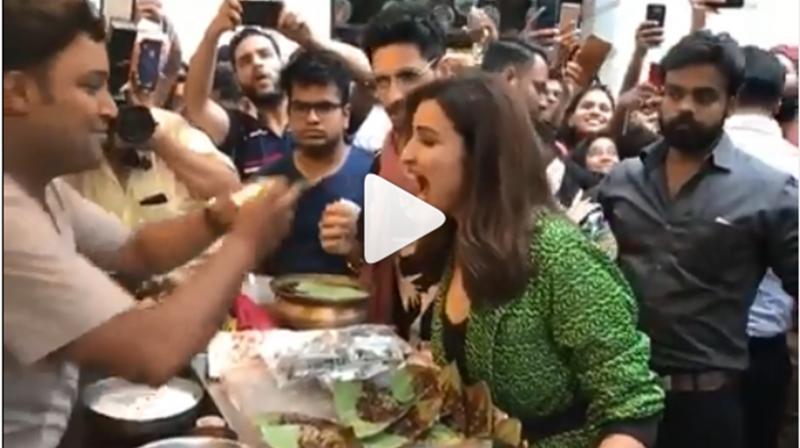 Mumbai: Jabariya Jodi actress Parineeti Chopra has been creating a huge buzz since the inception of the movie for playing a rustic character of a girl from Bihar. Recently, on one of the promotional events for the film tried a ‘Fire Paan’ and was completely surprised after trying out this street delicacy.

The actress also shared a post about the same on her Instagram handle captioned as, "Sid likes paan. I don’t. We are a jabariya jodi 🤣 Also, FIRE paan? Ummm. 😱😱😱 @sidmalhotra"

The actress was amazed at its fiery yet sweet taste and it evidently looked like as if that the actress has had the Paan for the first time. In a significant move, Paan is also symbolic of her character and the culture she hails from in the film.

Giving more insights about Parineeti's character in the film, the actress turned heads with her homely character which is very fierce in nature. There are also moments in the film where the actress outwits the actor Sidharth Malhotra with utmost ease and flare.

The actress also shares sizzling chemistry in the film's most loved song 'Khadke Glassy’ with her co-star Sidharth Malhotra and is also seen sharing adorable moments with him in yet another song 'Ki Honda Pyaar' from the film, making it the most relatable song to all the young couples out there.

The film's interesting content which has been creating hype owing to its unusual content, the Prashant Singh directorial 'Jabariya Jodi' is all set to deliver a one of its kind love story to the audience- a surprise wedding of the year which is based on the practice of Pakadwa Shaadis.

The film is shot at real locations in Uttar Pradesh to give the right flavour. Also, the film's concept is very unique and is based on real practice brought to screens for the first time ever and as it is inspired by real incidents of Pakadwa Shaadi.

Interestingly, both the writers of the film, Sanjeev K Jha and Prashant Singh belong to the same state so they took to fact and fictionalized the story, keeping it as real as possible.

The film also stars the varied powerhouses of talent such as Aparshakti Khurana, Sanjay Mishra, Neeraj Sood, Gopal Dutt, Javed Jaffrey, and Chandan Roy Sanyal. With a stellar cast, the movie is set to take over as a new love saga.