Boney Saab was crying like a baby until 5 am, says Sridevi's co-star Adnan Siddiqui

The actor who played Sridevi's on-screen husband in 'Mom' is deeply shocked and saddened by the news. 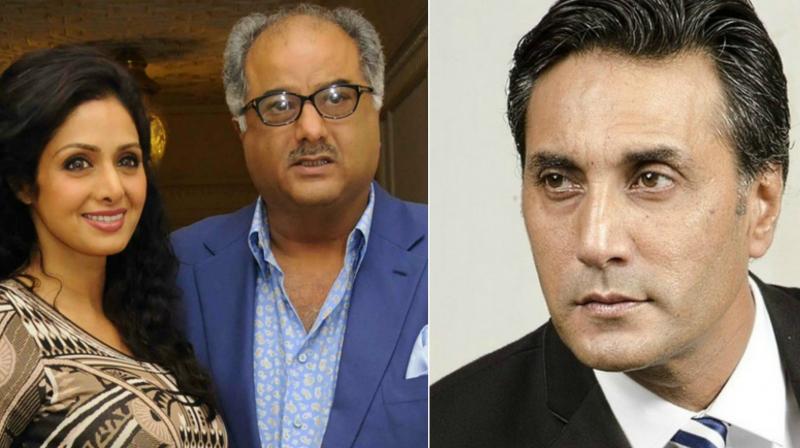 Mumbai: The nation woke up to the shocking news of Bollywood actress Sridevi's untimely demise on Sunday. Sridevi passed away after suffering severe cardiac arrest in Dubai.

Sridevi’s Pakistani co-actor from the 2017 film 'Mom', Adnan Siddiqui was one of the first few people to reach the Jumeirah Emirates Tower after learning about the actress’ demise on Saturday night. The actor who played Sridevi's on-screen husband in the film is deeply shocked and saddened with the news.

While speaking to mid-day, Siddiqui said, “I got a call from a journalist at around 11 pm asking if the news about Sridevi’s death was true. I immediately called up Boney [Kapoor] saab and rushed to him,” adding that, “I got to Jumeirah Emirates at around midnight. Initially, I was not allowed to go upstairs. At the time of the investigation, only Boney saab and Dubai officials were present. So, I waited in the lobby for about an hour.”

He further added, “When everything was settled, Boney saab called me upstairs. He was there along with a family friend, his wife and a daughter. Boney saab was crying like a baby; he was inconsolable. I was with him until 5 am. He was under a lot of stress, so I advised him to rest, and then left.”

The Pakistani actor, who is a good friends with Sridevi and Kapoor, couldn’t catch up with the actress after their fim's release due to the ban on Pakistani artistes after Uri attacks. However, Sridevi had personally invited him for her nephew Mohit Marwah’s wedding in Dubai. “When I landed in Dubai at 11 pm last week, I called up Boney saab and asked him if it made sense for me to come at that hour considering the function may have been over. He said, ‘Even if the function gets over, we will wait for you’. So I drove for two hours to Ras Al-Khaimah,” recollected Siddiqui, adding that, Sridevi was true to her word, she indeed was waiting for him. “I can’t believe that I met her four days ago and now, she is no more,” added Siddiqui.

The cause of actress’ death on Monday was revealed as ‘accidental drowning’ in a bathtub in her hotel bathroom.

The actress’ mortal remains are likely to return to the country on Tuesday after the repatriation formalities are completed.