Entertainment   Bollywood  27 Jun 2018  Dhadak Zingaat song: Ishaan dances his heart out to woo Janhvi, does she give in?
Entertainment, Bollywood

Dhadak Zingaat song: Ishaan dances his heart out to woo Janhvi, does she give in?

'Dhadak' will have a reprised version of superhit song 'Zingaat' from the original Marathi film 'Sairat'. 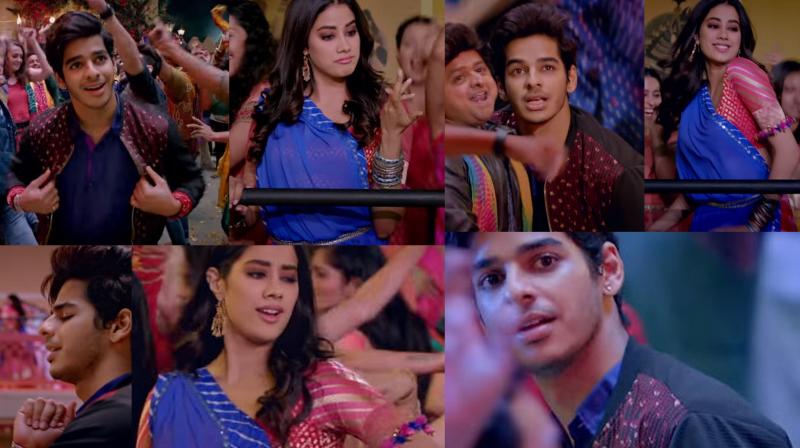 Mumbai: Ishaan Khatter and Janhvi Kapoor are excited to make their big Bollywood debut with Karan Johar's romantic film 'Dhadak'. After the fantastic response to the trailer, the makers have now released the recreated version of immensely popular song 'Zingaat'. Dhadak, which is an official remake of blockbuster Marathi film 'Sairat', will have the reprised version of hit song 'Zingaat' from the original film.

The song has been re-composed by Zingaat’s original duo Ajay-Atul, while the Hindi lyrics have been provided by Amitabh Bhattacharya. Choreographer Farah Khan has given electrifying moves to Ishaan and Janhvi.

The video song features the leading couple matching steps to the energetic beats while Madhur (Ishaan's character name) tries hard to woo Pari (Janhvi in the film) and they ultimately kiss at the end of the song.

Producer Karan Johar expressed his excitement in unveiling the Hindi version of 2016's most popular soundtrack Zingaat. He took to Twitter and wrote,"Come on! It’s time to do the #Zingaat!💃 Song out now."

Produced by Karan Johar's Dharma Productions and Zee Studios and directed by Shashank Khaitan, 'Dhadak' is scheduled to release on July 20, 2018.