Zarina Wahab confirmed that they took the step as they are disturbed about Kangana wronging them with her claims. 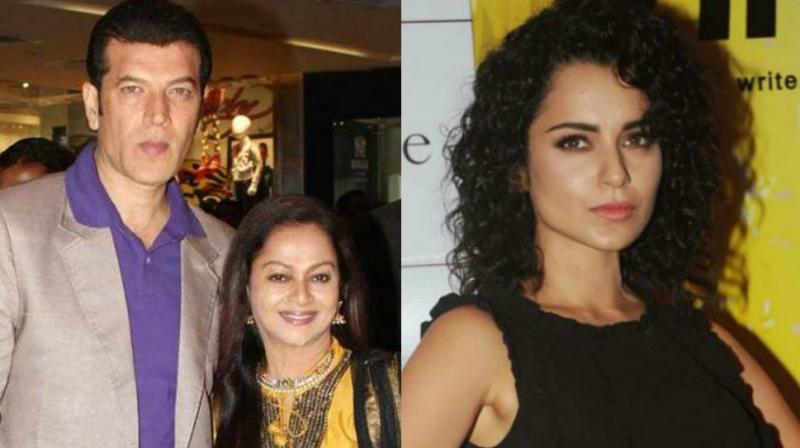 While Zarina Wahab has often maintained silence regarding Aditya Pancholi's affair with Kangana Ranaut years ago, this time she did speak about it.

Mumbai: From being a part of headlines continuously for some days, Kangana Ranaut quickly slipped into oblivion after the average performance of her film 'Simran' recently.

However, it seems that the controversial allegations she made on a television show can’t keep her out of the spotlight for too long.

Kangana’s claims against her rumoured ex Hrithik Roshan, accusing him of stalking and harassing her, refusing to marry her, didn’t receive a response from her ‘Krrish 3’ co-star.

Even her ex-boyfriend Adhyayan Suman seemed least aware and interested about Kangana’s "looking back, I should’ve hit him" comment over his claims about the actress' abusive nature towards him during their relationship.

However, the actress’ former lover, actor Aditya Pancholi was angered by the actress’ claims and had threatened to send a legal notice to her. Kangana had claimed that Aditya kept her under ‘house arrest’ and that when she approached his wife Zarina Wahab, she told her it was good he is not at home because of their affair as he tended to be physically abusive to some of the workers at home.

And now Aditya and his wife, actor Zarina Wahab, who had also shut down Kangana’s allegations before, have gone ahead and filed a legal notice against the ‘Simran’ actress.

Zarina confirmed the news to entertainment portal Pinkvilla saying, "Yes, we have sent a legal notice to Kangana. Currently, we can't really talk about it as our lawyers have said not to divulge more details. Give me a week's time, I will surely talk to you in detail about the legal notice."

She added, "Yes, we are disturbed. She did bad to us and that's why we have sent a legal notice to her (sic)."

The entire Hrithik-Kangana row had started with a legal notice by the former about her ‘silly exes’ comment, and it’s very likely that something along similar lines could happen with her again, but this time with Aditya and Zarina.