Madhuri and Anil reunite with Mowgli

The actress will lend her voice to the character Nisha, while Kapoor dubs for Baloo. 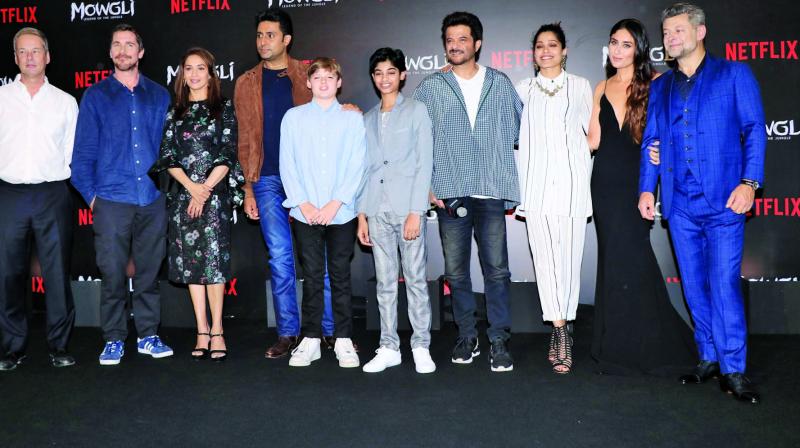 “The lady who did the original voice, Ms (Naomi) Harris was so good that all I had to do was use my voice and her expressions,” reveals Madhuri about voicing Nisha. “It is a beautiful character of a mother. She is good enough to accept a man cub as her child. People today are not keen on embracing new things, but she does. She is generous and giving, and accepts him as her own. I enjoyed playing her. She is beautiful. She is ferocious and she will protect her own,” says Madhuri of her character.

Interestingly, Nisha was the name of Madhuri’s character in Hum Aapke Hain Kaun? “Yes, it was,” smiles Madhuri. “I am looking forward to both my films next year, Total Dhamaal and Kalank,” says the actress.

While Kareena Kapoor Khan voices the character Kaa in the Jungle Book.
“Our childhood has been about Mowgli, Sher Khan, Bagheera and Kaa. We have grown up on those stories. Fans can see their timeless classic in any language they want,” exults Kareena about the film.

“I really love the character. When I was offered the film, Saif’s initial reaction was, ‘I hope you are doing the character of Kaa.’ Kaa has such a unique quality and is a very powerful character. I am very honoured to lend my voice to the character. All my fans have seen me as a girl-next-door. I have tried to do a different character and I am sure my fans will be surprised to hear the voice of Kaa,” says Kareena.

“Content has been working these days. And if it is good content, I would want to be a part of it. The web is a great platform. Sacred Games has been received with so much love. Wherever I go, people ask me when season two will be coming out. People are eagerly awaiting the second instalment,” says the actress.