Noted poet of the country and father of one of the most celebrated Indian actors Amitabh Bachchan, Harivansh Rai Bachchan. 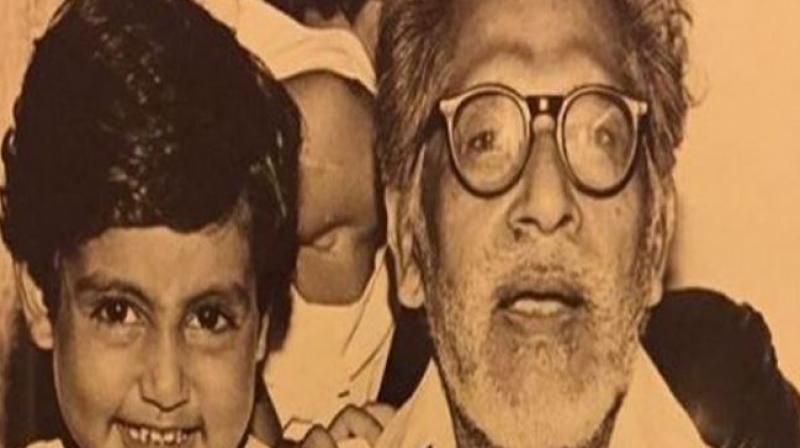 New Delhi: "It would have been my grandfather's 112th birthday today," said Abhishek Bachchan while remembering late poet Harivansh Rai Bachchan on Wednesday.

Noted poet of the country and father of one of the most celebrated Indian actors Amitabh Bachchan, Harivansh Rai Bachchan is widely remembered for one of his literary creations -- 'Madhushala'.

He is credited with bringing out some really outstanding poems and some of which include 'Aakul Antar', 'Ekaant Sangeet', 'Soot Ki Maala', 'Aarti Aur Angaare' and 'Bahut Din Beete' among others.

Paying respects to his grandfather on the day, the 'Guru' actor shared a picture of him with his second wife Teji Bachchan writing, "Still remembered, still missed."
Veteran actor Neetu Kapoor too paid her respects in the comment section.

It would have been my Grandfather's 112th birthday today.... Still remembered, still missed.

On his work front, Abhishek has bagged the lead role in Shah Rukh Khan's upcoming production titled 'Bob Biswas', which will be directed by Diya Annapurna Ghosh and directed by Gauri Khan, Gaurav Verma along with Sujoy Ghosh.

Junior Bachchan is also awaiting the release of 'The Big Bull', which is being produced by Ajay Devgn. The film marks the duo's reunion after seven years they last collaborated in Rohit Shetty's 'Bol Bachchan.'

It is being helmed by Kookie Gulati and as per media reports, the feature will star Ileana D'Cruz. The first poster of the film was out in September where Abhishek described it as "an unreal story."