The actress' body was flown back on Tuesday after Dubai authorities determined that she had accidentally drowned. 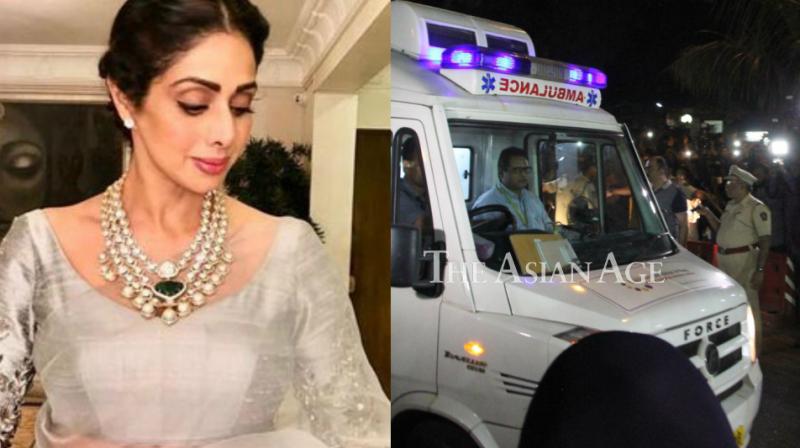 Sridevi's mortal remains arrive in an ambulance at the Kapoor residence on Tuesday.

Mumbai/Dubai: The body of Bollywood icon Sridevi, whose sudden death triggered a frenzy of grief, disbelief and searching questions, was flown back to Mumbai on Tuesday after Dubai authorities determined that she had accidentally drowned in her hotel bathtub.

Family members, including her filmmaker husband Boney Kapoor and stepson Arjun Kapoor, brought her body in a private jet after three days of uncertainty over her unexpected death on Saturday in Dubai. Earlier in the day, Dubai Public Prosecutor's Office put an end to speculation about the cause of her death, saying she accidentally drowned in the bathtub following loss of consciousness, and that the "case was now closed". It did not say what caused the 54-year-old superstar to lose consciousness.

The Embraer jet, owned by industrialist Anil Ambani, landed in Mumbai around 9.30 p.m. and the cremation is scheduled on Wednesday around 3.30 p.m. Anil Ambani, wife Tina Ambani and Anil Kapoor were among those at the airport when the plane landed.

The mortal remains were then taken to the Lokhandwala residence of the Kapoors where several police personnel along with a host of private security men were deployed for crowd management. As the ambulance carrying Sridevi's mortal remains entered her residence in suburban Andheri, a large number of fans jostled for a glimpse of their favourite actor. Both sides of the road leading to Sridevi's 'Green Acres' residence in Lokhandwala were crowded with her fans, with some even climbing the trees to have a clear view. The ambulance, escorted by three police vehicles, brought the body home from the airport at around 10:30 PM soon after it arrived from Dubai. Designer Manish Malhotra, Shabana Azmi and Javed Akhtar were among those who visited the residence soon after the arrival of the body.

Sridevi, known as Indian cinema's first woman superstar, leaves behind her husband and their two daughters Jahnvi and Khushi. "On behalf of Khushi, Janhvi, Boney Kapoor, the entire Kapoor and Ayyappan families, a sincere thanks to the media for your continued sensitivity and support during this emotional moment," a statement by the family said. The 54-year-old Bollywood icon was in Dubai to attend a family wedding. Her death sent shock waves across India with those who knew her at a loss to explain how the star could die so suddenly. At first it was reported that she died of cardiac arrest, triggering questions and disbelief. However, it later emerged that she had drowned in the bathtub in her room at the Jumeirah Emirates Towers hotel. As more speculation swirled, the Dubai government's media office said in a series of tweets that the case is now closed.

"Dubai Public Prosecution has approved the release of the body of the Indian actress Sridevi to her family following the completion of a comprehensive investigation into the circumstances of her death," it said.

"Dubai Public Prosecution stressed that all regular procedures followed in such cases have been completed. As per the forensic report, the death of the Indian actress occurred due to accidental drowning following loss of consciousness. The case has now been closed."

In its statement, the family said her body will be kept at Celebration Sports Club in Lokhandwala near her home for people to pay their last respects from 9. 30 a.m. to 12.30 p.m. on Wednesday before it is taken for cremation.

The family said media can also pay their respects "provided camera, recording devices, etc are left outside the venue".

"The last journey will commence at 2 pm from Celebration Sports Club to Vile Parle Seva Samaj Crematorium and Hindu Cemetery," it said.

While Sridevi had stayed back in Dubai after the ceremonies, her husband Boney Kapoor had flown back to Mumbai with their younger daughter Khushi. But he returned to Dubai to surprise her, according to Khaleej Times newspaper. Arjun Kapoor reached Dubai in the morning to be with his father.

In Mumbai, industry insiders and friends visited the family in the home of actor Anil Kapoor, Boney Kapoor's younger brother. With their father away, Khushi and Jahnvi were at their uncle's Juhu home.

"For me it's the most painful thing I have dealt with after my dad's passing away. And her face is coming in front of me again and again," actor Rani Mukherji told PTI.

"The love she had for me was so tremendous and intense that I feel somewhere that I have lost a guiding light in my life. She has been my inspiration personally and professionally. She was very close to me. She was like my 'maasi' I would say. She was someone I looked up to. I just feel there is one more person I have lost in my life I loved and who loved me back," Rani said. The others who have called on the family in their hour of grief include Shah Rukh Khan, and his wife Gauri, Rajinikanth, Kamal Haasan, Ranveer Singh, Deepika Padukone, Tabu, Rekha and Farah Khan.