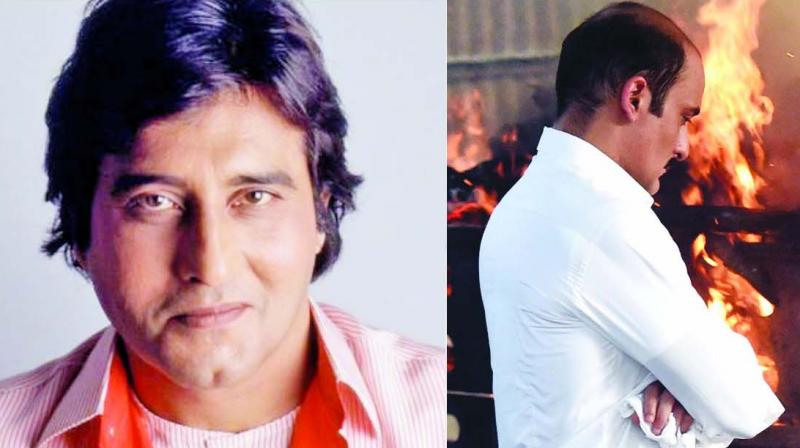 Vinod Khanna; his son Akhshaye next to his pyre. (Photo:PTI)

Mumbai: Film legend Vinod Khanna, who was also a Member of Parliament from Punjab’s Gurdaspur district, succumbed to bladder cancer at 11.20 am at a south Mumbai hospital on Thursday. He was 70.

Khanna, who joined the Bharatiya Janata Party (BJP) in 1997, was inducted as Union minister for culture and tourism by the then-Prime Minister Atal Bihari Vajpayee in July 2002.

Six months later, he was asked to take over the additional charge of the prestigious ministry of external affairs (MEA) as a minister of state. He was a four-time Lok Sabha member. The actor is survived by his wife, Kavita Khanna, and four children — Rahul, Akshaye, Sakshi, and Shraddha. Rahul and Akshaye, both actors, were from Khanna’s first marriage to Geetanjali Khanna.

Feted as one of the most handsome actors of the Hindi film industry, Khanna made his debut in 1968 with Man Ka Meet. In many of the earlier films, Khanna played a negative or supporting role.

A picture of the veteran actor with his wife and son had gone viral on April 6, in which he looked frail. The actor was hospitalised on March 31 for severe dehydration. Earlier, the family had denied that the actor was suffering from cancer.

A hospital source, speaking The Asian Age, said on Thursday, “The late actor had been unwell for many days. He was receiving treatment for gall bladder cancer. His health started deteriorating and few days ago he had stopped taking feeds.”

Recalling Khanna’s contribution to the people’s welfare, Mr Patel said, “When he took charge of the ministry there was no airport in Pathankhot. Due to his hard work, we now have a developed airport there. ”

Ms Mirza, vouching for the immortal status of Khanna’s body of work, said, “He never died. A person like him will never die.”

Stating that a person like Khanna is rare to find, director Subhash Ghai said, “He is a legend. The cinema fraternity has lost a charming face.”

Mr Joshi, while sharing that he grew up watching Khanna’s films, said he was one of the most fascinating personalities of the film industry. The actor’s first wife and her sons were also pr