Entertainment   Bollywood  28 Oct 2017  This video of Katrina bonding with a kid at an airport is just too adorable
Entertainment, Bollywood

The actress is seen chatting with a kid and buying toys in a video shared by her 'Tiger Zinda Hai' director. 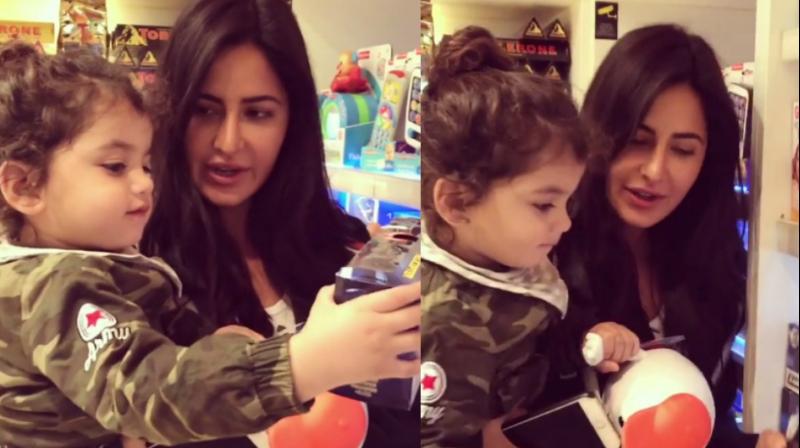 Katrina Kaif with a kid in the video posted on Instagram.

Mumbai: The high-octane poster of 'Tiger Zinda Hai' made all the right noises, assuring fans of Katrina Kaif that she will redeem herself after the debacles of 'Fitoor', 'Baar Baar Dekho' and 'Jagga Jasoos'.

While Katrina seemed all intense and focused while fiercely aiming the gun in the poster, the actress is the opposite of it in real life.

Her Instagram handle is filled with some delightful pictures of her candid moments or ones with her co-stars Shah Rukh Khan, Salman, and directors Ali Abbas Zafar or Aanand L Rai.

Ali especially shares a great equation with Katrina and shares several pictures with her on social media.

The director has this time shared an adorable video of Katrina as she buys toys for a little kid at an airport.

The actress asks the kid, “Which toy do you want?” and when met with a 'kholo'(open) response, says, "But if we open it, we have to pay for it.”

And when the little one says ‘Chaiye’ (want), the actress decided to buy it for the kid.

Like the adorable picture she had shared with her young co-star from the film, who she had also worked in ‘Mere Brother Ki Dulhan’, the actress seems to love the company of kids.

The actress recently returned from Greece where she wrapped another schedule of ‘Tiger Zinda Hai.’ The film is set to release on 22 December.