I want to leave behind a legacy, says Priyanka Chopra 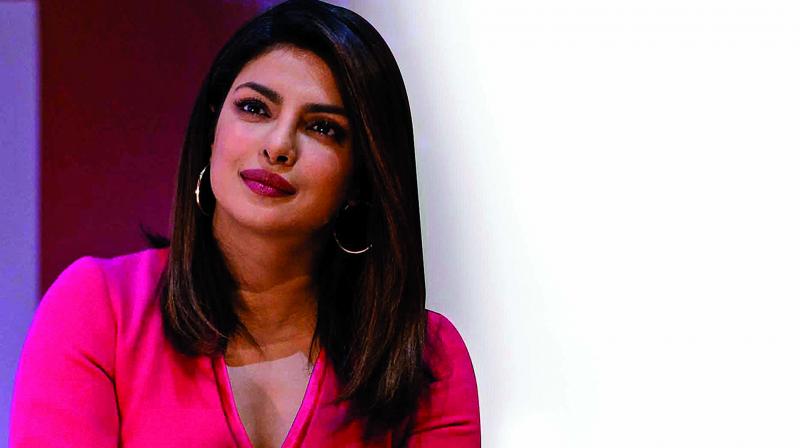 As she interacts with the audience, Priyanka Chopra patiently listens to a fan speak.

There were murmurs about why Bollywood star Priyanka Chopra had been invited to deliver the annual lecture for a publishing house. The actress had a ready response: “Because Shobhaa De invited me. Those who don’t want to listen to me, are welcome to leave.”

Priyanka’s hour-long session in Delhi was divided into two parts — in the first half she spoke extempore and in the second, she interacted with moderator Sonia Singh.

Being fierce, fearless and flawed
Dressed in a pink jumpsuit, delivering The Penguin Annual Lecture on Breaking the Glass Ceiling: Chasing the Dream, the 35-year-old began, “My father used to say why, you want to fit in the glass slipper when you can break the glass ceiling. But I never wanted to smash it. All I wanted was to become the best version of me and smash the obstacles that come by way. But the glass ceiling exists and I hope by sharing my experiences, I can motivate you all to aim higher. I reached here by being fierce, fearless and flawed.” She ended the first half sharing a thought that has stayed with her, “Life’s journey is not to reach your graveyard safely in a well-preserved body, but to look back and say ‘that was some ride.’ I want to end that way.”

On the Padmavati controversy
“I called Sanjay sir and Deepika and told them that I support them. I hope the art is viewed by everyone,” she said on the uproar over the film. But why not speak publicly? “Because celebrities are used. See, at a lecture about my life, I am being asked questions about another film. Ask the government. I may have an opinion, but I don’t need to be  cornnered to give out a statement,” she said with a tinge of frustration.

‘Mere layak ladka milna chahiye’
Even as Priyanka spoke at length, her friend and colleague Anushka Sharma hosted a reception party for her wedding in Mumbai. Another friend, Meghan Markle will be walking down the aisle soon. When will we PeeCee tie the knot? She answered, “Of course, I want to get married. I am a Cancerian — I love home! I want to have a cricket team of kids. But I am not apologetic for my career. I will do it at the right time par mere layak ladhka bhi toh milna chahiye. Woh thoda mushkil hai (finding a man for myself is difficult).”

‘Zeroes on boys’ cheques are ridiculous’
It was the second part where the UNICEF’s global goodwill ambassador showed her gritty side, often cross-questioning the moderator, training her guns on the media, politicians and society at large. “I always have the same dream that manifests into different things. And, my biggest dream is to leave behind a legacy,” the Bareilly girl said when asked about her plans in 2018. At this juncture, the actress, who reportedly was paid `5 crore for a performance at an awards event, was asked about the zeroes on her cheques and pat came her reply. “Those zeroes matter because I worked really hard for them. It’s funny that people talk about my fees; boys are never asked this question — their zeroes are ridiculous. Have you even seen the zeroes that they get on their cheques? We should be celebrating that at least there’s one girl who has gone out there. I am proud that I can stand shoulder to shoulder to my counterparts in that (Forbes top ten) list but it brings out the question why there is just one female actor, especially when actresses are so integral to our movies.”

She mentioned that she stopped playing arm candy a long time ago. About her comeback to Bollywood, she quipped, “Nobody asks the boys about when they will make a comeback. They can take time to find right movies and nobody questions their relevance. Why should my relevance be less?”

Biggest achievement and regret
“My biggest achievement is the ability to get over my fears… to turn my vulnerability into my strength because I’m usually emotional and I get affected by a lot of things. I know I come across as tough, sassy and witty. While that is a big part of protecting myself, there has not been anyone holding out a safety net for me. I trust my instinct, so that even if I fail, it’ll be my failure. My biggest regret is I didn’t spend as much time as I did with my dad,” Priyanka signed off as she got a standing ovation.

PeeCee’s 12 rules of becoming the version of yourself: