Cops, around the clock

With Akshay Kumar’s Sooryavanshi becoming the first film set to run 24/7 in Mumbai theatres, will this move get more audience to the cinema halls? 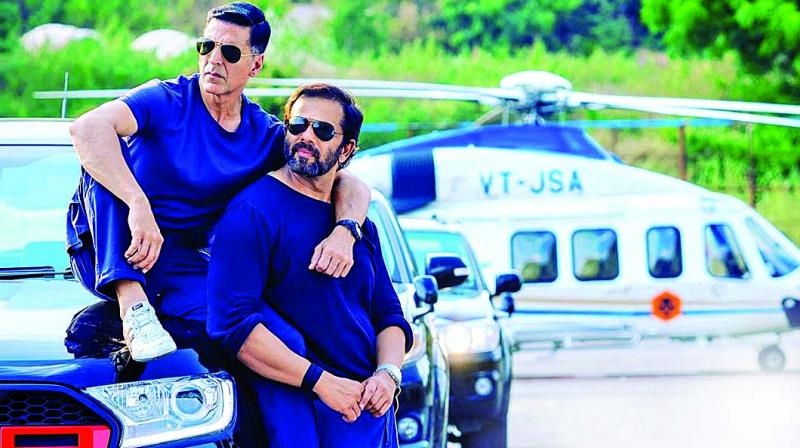 When it comes to releasing a film of a big star, Bollywood prefers to play safe. For decades, Salman Khan has reserved Eid for releasing his films, Shah Rukh opts for New Year, whereas Akshay Kumar generally releases his films during Independence Day or other national holidays. However, this time, the Khiladi of B-town is releasing his most anticipated film of the year Sooryavanshi, with Rohit Shetty, on March 24 when Maharashtra will celebrate Gudi Padwa – the Marathi New Year. The film will not only release on Tuesday but will also be running in theatres 24/7. This announcement is perhaps in the wake of the Maharashtra government’s new directive that allows shopping malls, restaurants and cinema halls to remain open round the clock.

Soon after, Akshay too shared the news on his Twitter account. He wrote, “Ain’t no time for crime coz Aa Rahi Hai Police! #Sooryavanshi releasing worldwide on 24th March. #SooryavanshiOn24thMarch. (sic).”

Cashing on star power
While this is the first time in decades that a film is releasing on Tuesday, it is also the first to have shows late night. However, one wonders if the audiences will warm up to the idea of watching a film post midnight. According to film distributor Raj Bansal, films like Sooryavanshi can take the risk of screening it round-the-clock. “In the case of Sooryavanshi, this will work because this is one of the most anticipated film. Small films can’t take that risk of running 24/7 and Sooryavashi too is an experiment. But seeing the cast and director’s combination, it is expected to do well,” says Bansal adding that it will be a treat to watch such films at night.

But trade analyst Amul Mohan reveals that having shows late night has been there for some time in Mumbai. “We have shows running till three in the morning, and with Sooryavanshi, they are just jumping into that and making it official because now, there is more awareness. They are using the situation for their best so more people will go to watch the film,” he opines.

Balancing of economics
While the 24/7 shows open the opportunities for audiences to choose their show timings, will it manage to generate revenue for theatre-owners after considering the overhead costs? “We are seeing this as a development which will offer more flexibility to our patrons with more show timings. However, the official instructions are awaited for us to make a clearer evaluation,” says Alok Tandon, CEO-INOX Leisure Ltd.

Mohan also feels that the film will reap benefits, as the second day of the release is a holiday in Maharashtra, helping the film to maximise their profits. “Technically, the film is releasing on the holiday and the day prior will have preview shows starting late in the evening.  The next day is the added benefit and makers will hike the ticket prices so they can earn the maximum profit even if people don’t go for late night shows,” says the trade analyst. He further adds that it is a rare scenario when a film is releasing on Tuesday and gets a five-day-long weekend. “It is very difficult for a film to sustain for five days barring Mumbai because it will have shows round the clock,” he adds.

The film will also have Ranveer Singh and Ajay Devgn in special roles and fans of the franchise are beyond excited. Soneer Vadhera, a fan of Akshay Kumar and Rohit Shetty is excited to be able to see the film on his convenience. However, he urges to keep the ticket prices low for the late night shows. “As a fan, I am excited, it will be a fun thing to do. I don’t have to wait for the next day to watch the film; I can finish my work and head to a theatre. But I also want to say that the prices should be low. So far, afternoon and evening shows are expensive and not everyone can afford it, so if that’s the case with this experiment too, then it doesn’t make any sense to the fans,” he rues.

Inspired from South
Although it is a new practice for Bollywood to have shows round the clock, the strategy has been existing in the south for over decades, specially when the film star’s a big hero such as Rajinikanth, Ajith Kumar and Mahesh Babu, among other top stars. “This is a norm in South. They release a film early in the morning and go till late nights. I think Rohit and Akshay are taking the lead from South and now there is a law as well, so it gives them the permission and makes it more valid,” concludes Mohan.