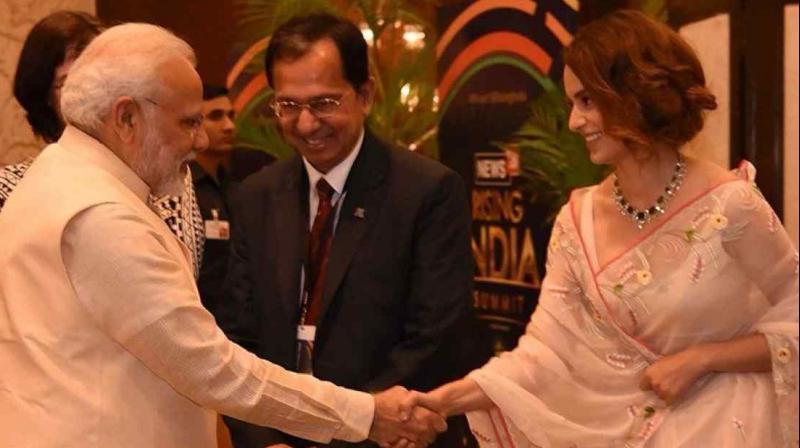 Mumbai: National Award-winning actress Kangana Ranaut on Saturday hailed Prime Minister Narendra Modi and said he deserves to come in power again in the upcoming 2019 Lok Sabha elections as he is the "rightful leader of the democracy."

Kangana attended the screening of short film 'Chalo Jeete Hain', which is reportedly inspired by the early life of Prime Minister Modi.

"The film has been made beautifully. It shows how Prime Minister Modi being a sensitive child went through such extreme circumstances. But I feel this film is not about him. Rather it is about us — how the society needs to be together to rise. This film is just a small part of his life," Kangana said after the screening.

When asked to analyse the last four years of the Prime Minister Modi-led Bharatiya Janata Party (BJP) government, Kangana said: "He (Prime Minister Modi) is the most deserving candidate. It's not like he has reached this place because of his mother and father. He is the rightful leader of the democracy. We have voted him as our Prime Minister. This cannot be taken away from him. This is his well-deserved place which he has earned after sheer hard work. So, there shouldn't be any doubt about his credibility as a Prime Minister."

Does she want Prime Minister Modi to be in power again?

Kangana said: "Of course. Why not? Five years are very less to take the nation out of a pit. Our country is in a pit, we need to pull it out."

Co-directed by Aanand L. Rai and Mahaveer Jain, 'Chalo Jeete Hain' invited a lot of praise from ministers after it was screened at the Rashtrapati Bhavan Cultural Centre on Tuesday.

The trailer reveals the story of a young boy, who keeps on asking his parents and other people as to what it is that they live for after reading a phrase, 'A winner is one who lives for others.'