The 'Sonu Ke Titu Ki Sweety' is not only handsome but also known as the cutest actors in B-town. 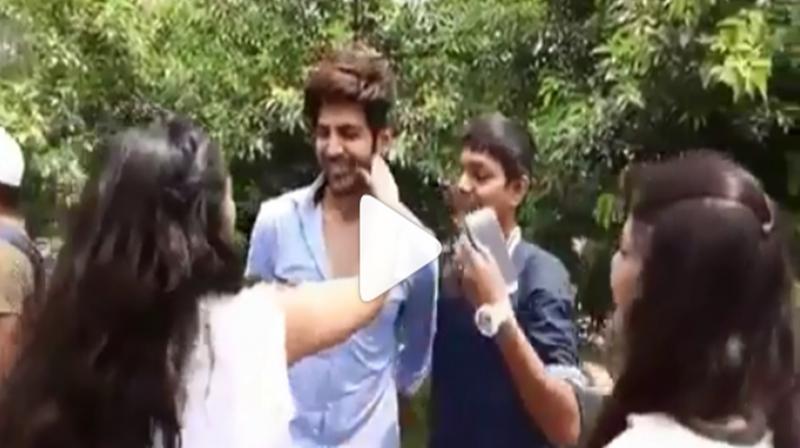 Mumbai: Bollywood actor Kartik Aaryan is now considered as the dream hero of every girl. The 'Sonu Ke Titu Ki Sweety' is not only handsome but also known as the cutest actors in B-town.

Recently, a girl fan of Kartik Aaryan has pulled his cheeks. Yes, a fan wanted to click a selfie with him and interestingly, the actor also agreed to do it. However, the girl was so in love with Kartik's cute smile and good looks as she pulled his cheeks like a baby.

Well, in this video, one can see how the female fans not only clicked selfies from different angles but also managed to pull his cheeks. Interestingly, Kartik also blushed and smiled after a girl pulled his cheeks. The video went viral on social media.

On the work front, Kartik will be seen opposite Ananya Panday and Bhumi Pednekar in 'Pati Patni Aur Woh' remake. The actor will also be seen opposite his rumoured girlfriend Sara Ali Khan in Imtiaz Ali's next untitled film.