Donning traditional Indian attire, the bride-to-be looked ecstatic as she posed for media with her to-be husband. 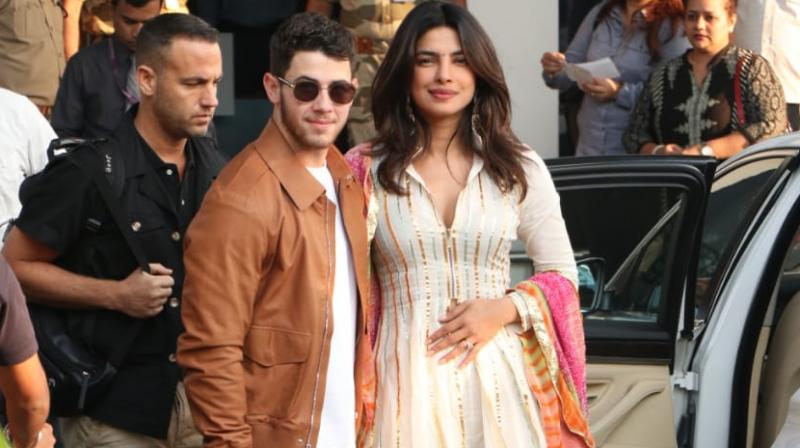 Mumbai: After kick-starting festivities in Mumbai, the much-in-love-couple Priyanka Chopra and Nick Jonas are now off to Jodhpur for their very own royal wedding.

The elated couple was spotted at the Mumbai airport here on Thursday morning.

Donning traditional Indian attire, the bride-to-be looked ecstatic as she posed for the media with her to-be husband Nick, who looked dapper in a brown leather jacket teamed with a white t-shirt and beige pants.

Also spotted at the airport were Priyanka's mom Madhu Chopra and Nick's brother Joe Jonas, who was accompanied by his fiancee and 'Game of Thrones' actor Sophie Turner.

The soon-to-be-married couple, who will tie the knot at Jodhpur's Umaid Bhawan Palace, began the wedding celebration with a puja at Priyanka's residence on Wednesday.

While Priyanka opted for a blue embellished suit for the occasion, beau Nick looked handsome in a pink and beige kurta pajama. Both of them added a twist to their desi avatars with edgy sunglasses.

Priyanka and Nick confirmed their engagement in August during a trip to Mumbai, where their families gathered for festivities, including a Roka ceremony and a grand engagement bash.