Akshay said he was bowled over by the humility of his '2.0' co-star Rajinikanth when he first met him. 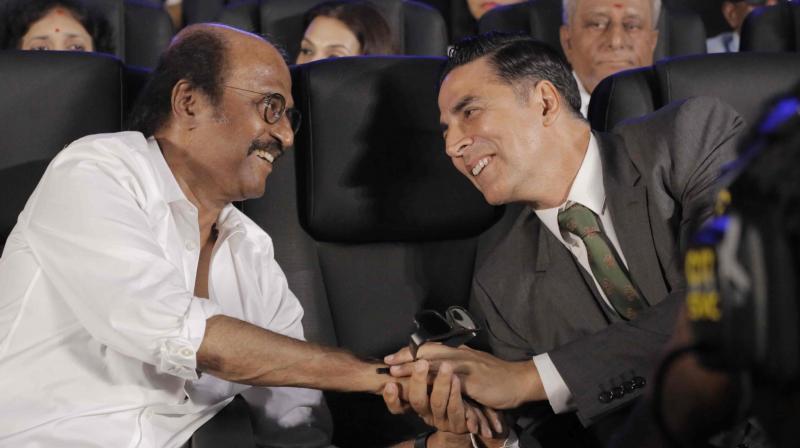 Akshay Kumar says working in the Rajinikanth-starrer "2.0" was a learning experience for him as he realised the south industry is not only more punctual but also more professional than Bollywood.

The actor plays the villain, Dr Richard, in the film which is a sequel to Shankar's blockbuster "Enthiran".

"Technologically, South is more advanced than us. They are more professional than us. If the shoot time is 7.30, the shooting will start sharp on time. Here, 7.30 means you can come by 9.30. Their superstars arrive on time on set," Akshay said in a group interview.

The actor believes newcomers should do at least five films down south before coming to Bollywood as time is not a luxury one can afford in southern cinema.

"You learn a lot. I sometimes feel a newcomer should do five films there and then come here. He or she will learn a lot. In a day, they take 30-40 shots. Here we manage around 12-13 shots... They don't take other people for granted. They value other people's time," he said.

The actor says he was bowled over by the humility of megastar Rajinikanth when he first met him.

"We used to talk in Marathi. He is a Maharashtrian and I also know the language. He is a great man. It's amazing how you give him one dialogue and he changes it into an epic dialogue. He puts entertainment in every line," he said.

Recently, Rajinikanth had said that "2.0" will belong to Akshay but the "Padman" star consider himself to be the "Amrish Puri" of the action-fantasy genre.

"2.0" is scheduled to release on Thursday.