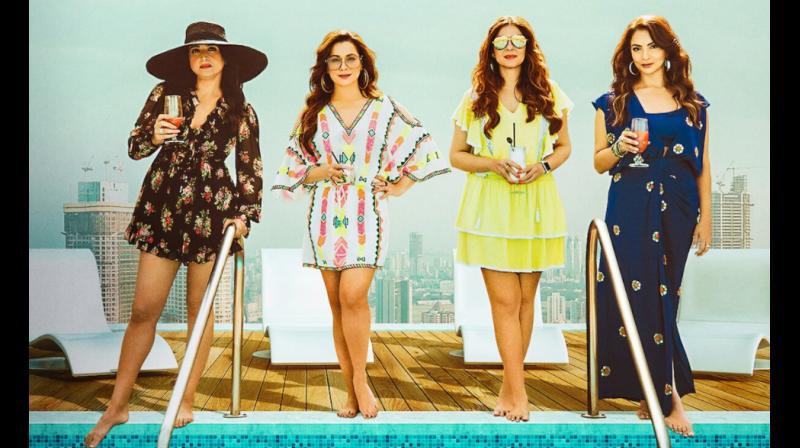 Recently, Netflix dropped the trailer of Fabulous Lives of Bollywood Wives, the first-of-its-kind reality show in India. The show features Meheep Kapoor (wife of Sanjay Kapoor), Neelam Kothari, (former actress and Sameer Soni’s wife) Seema Khan (wife of Sohail Khan), Bhavna Pandey (wife of Chunky Panday), who invite you into their homes, giving a sneak peek into what it takes to be ‘fabulous’, and the reality behind the glamorous life of Bollywood stars and their wives.
Tagged as ‘star wives’, the cast actually draws the link with their super successful family backgrounds than their not-so-star husbands. Just Google for who these women are and you’ll understand what we mean. Maheep is Anil Kapoor’s sister-in-law, Bhavna is Ananya Panday’s mother, Seema is Salman Khan’s sister-in-law and Neelam is a former actress, who married a TV actor who did a few films in supporting roles.
Fine; we’ll still call them ‘star wives’. All these women, looking fabulous in their middle age, are shown navigating life in the public eye and the Bollywood social scenes while striking a balance between their personal and professional lives. One of these ‘star’ wives in the show says, “People have this misconception about us that we have these oh-so-glamorous lives but that’s not really true. Our lives can be quite mundane.”
Their ‘mundane’, however, includes shopping in their Rolls Royce, messaging Kim Kardashian, planning for comebacks and attending luxury dinners at some A-list actor’s house. Interesting, eh? If none of that stirs your curiosity, then towards the end, Gauri Khan, wife of superstar Shah Rukh Khan and a successful interior designer — thanks to her star husband — would make her entry.

Produced by Karan Johar’s Dharma Production’s digital company, the show is touted as a guilty pleasure. Like Indian Matchmaking, a show that was regressive and yet rode on slick production and a bunch of rich, confused and desperate-to-be-married-by-a-certain-age NRIs, Fabulous Lives of Bollywood Wives, which is soon to warm Netflix, is a poor man’s rip off and remix of Sex and the City and Keeping up with the Kardashians. Plush locales, swanky five-star destinations, designer booty, sparkling stilettos, champagne and men in trunks, pool sides, pouted-red lips, perfectly blow-dried hair, fake accents and a bunch of bored housewives of Mumbai whose only claim to fame are their husbands, who aren’t really A-listers.
Senior author and columnist, Sreemoyee Piu Kundu, calls out Netflix for accepting such substandard shows. “We are so obsessed with Bollywood. Anything that has to do with Bollywood and Bombay, glitz and glamour, it just works. Most of the content on Netflix in India is crap and more than the makers the streaming platforms are to be blamed for selecting it to stream. Whoever has the access to acquire content on these OTT platforms is following herd instincts. And mostly, they are just copying,” says Kundu. Then comparing the show with Indian Matchmaking, which despite criticism was binge-watched by most of the population, she adds with an annoyance that is hard to miss, “There is a lot of money that has been poured into it. Look at the production cost. The trailer seems completely brainless but the production value is high. Our audience’ maturity level is like teenagers’. This seems very aspirational to them. We are a mediocre nation, produced by mediocre content head to the mediocre audience.”

Matching standards of the Indian audience

With varied content, OTT has become a boon in India. While there have been substandard movies making big at the box office, it was a sigh of relief to see streaming platforms bringing some extraordinary content. But with artistic mediocrity, creative ennui and the nepotism that also breeds between OTT platforms in India, the clout of the Bollywood brigade gets a platform to display such big budget mediocre content.
Speaking about the trend, screen-writer and poetess Ayushi Ghoshal says it is evident that Netflix is trying to serve Indian audience sizzling, ridiculous and love-to-hate kind of content. “There is a large chunk of the audience that craves mindless watching and loves to make memes out of the latest content,” she says, claiming that it’s a formula for success. “There are many shows that have no quality and I think audiences enjoy watching shows where there is a masala. OTT platforms are serving the demand.”
In fact, Ayushi also believes that watching the lives of people/women at places of privilege probably makes many others feel liberated. “That’s their formula of success,” she adds.

While pointing a finger at the platform, author and filmmaker, Era Tak voices her concern about how a series such as this might ultimately create a sense of inferiority in women.

“So let’s assume it is true that we want to show what people are watching, but who are these people? What percentage? I think the makers are obsessed with Bollywood and their lives, and they feel it will attract the audience in small towns. We have grown up seeing some regressive content on TV showing women in bad light, and this is just a higher-society, glamourous version of it. The filmmakers are looking at what kind of content is getting sold,” states the author, while adding that Netflix should play responsible and approve content that is original. “Those may not have glamour but they will have more originality and a storyline.”

Another filmmaker Shyam Upadhyay has no qualms in stating that such regressive content on the platform is the result of a spineless behaviour of a very well-known platform. “It is almost as if just because Karan Johar made the show, so accepted! But I can understand this, for Dharma Productions is believed to have some very strong contacts among the Netflix team, which makes it easy for his content not to face challenges,” says the filmmaker. “But honestly, who is interested in seeing what these ‘star’ wives do? It’s bizarre content, and while something like this is expected out of Karan, it’s unacceptable for Netflix to approve such content, which brings nothing of value.”

Shyam then shares his concerns about our lack of responsibility as a society. “In countries abroad, people take the responsibility of what they show, but in India, there is nothing like that. Rules and formats only work for the lesser-knowns or the unknowns. People who have contact will make it through, even if their content is cheap,” he adds disappointedly.