No hard feelings: Kangana Ranaut’s views on ex-foe Karan Johar will surprise you

After being locked in a bitter war of words over nepotism, the duo have patched up and we have proof. 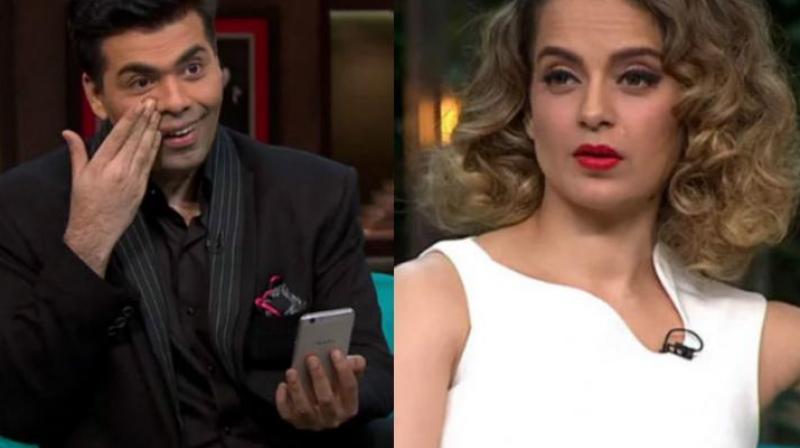 Karan Johar and Kangana Ranaut have worked together in 'Ungli.'

Mumbai: The year 2018 has started off with ‘Padmaavat’ triumphing over all the negativity victory surrounding it by releasing and storming into the Rs 100-crore club in the first weekend itself.

There was another such victory over negativity at the start of the year; we are talking about former foes Kangana Ranaut and Karan Johar.

The actress happily agreed to make an appearance on the filmmaker’s reality show ‘India’s Next Superstars’ where the duo ‘hugged and made up.’

Despite all the camaraderie brewing between the duo, the actress was at her fiery best, leaving no opportunity to take digs at Karan, all in good jest.

Kangana earlier claimed that her appearance on the show was a professional assignment for which she was getting paid, but the interaction has definitely thawed the equation between the two.

The actress opened up on reuniting with the filmmaker in an interview to ABP News, where she said, “I have been on his (Karan) other show and met him otherwise too. See, I don’t have a personal agenda no matter who I have spoken about. I have always spoken about issues be it nepotism, exploitation, sexual harassment, these are issues. Not that I am always right, I have been wrong in many instances in life. That does not mean I do not have the right to voice my opinion. Karan is mature. He knows I don’t have hard feelings for him. I don’t have the goal of changing Karan Johar but my goal is to eradicate issues to make our society a better place to live.”

For the unversed, the duo was locked in a bitter battle of words after the actress accused the filmmaker being a ‘flag-bearer of nepotism’ on his TV show and it's both surprising and heartwarming to see them patch up so quickly.