“I really like films that give me a chance to perform,” says Swara Bhaskar, who is looking forward to the release of her film, Veere Di Wedding. 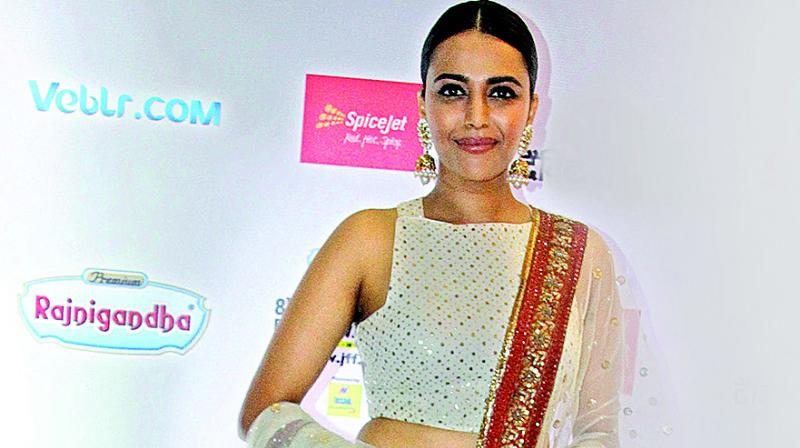 Swara Bhaskar is quick to respond to and take a stand on issues and she doesn’t mince her words while expressing her views. Trolls and social media uproars don’t budge her will. And she is as clear about her profession and her choices as she is about her clear opinions.

“I really like films that give me a chance to perform,” says Swara Bhaskar, who is looking forward to the release of her film, Veere Di Wedding. “I opt for characters that give me satisfaction as an actor. I’m a really greedy actor, I always want a meaty part. Even in films like Raanjhana — where I played the character of Bindiya — I had a very memorable role. Same goes for Prem Ratan Dhan Payo — a hardcore commercial film — but my character had something interesting to do. In Nil Battey Sannata (2016) and Anaarkali of Aarah (2017), I had no inhibitions as I had tremendous faith in these films.”

Talking about her latest venture in the mainstream cinema as a lead actor, the 30-year-old says, “Veere Di Wedding was exciting for me because I was doing something outside my comfort zone. I have never been the lead in a commercial film, nor have I played an uber-rich character — richest amongst the four main characters (Sonam Kapoor Ahuja, Kareena Kapoor Khan, Swara Bhaskar and Shikha Talsania). So far, all my characters have been lower or middle-class characters. Truth be told, I was really nervous but the moment I admitted that, I decided that I should do it. As an actor if you don’t go outside your comfort zone, then you are not going to grow and nor will your craft grow. So, this film came as a challenge — to see if I can pull off a hardcore mainstream commercial part,” says the outspoken actor.

But how did the artistic journey begin for Bhaskar? “I think acting started for me just as it starts for all star-struck kids. We are a cinema-consuming nation. And I too grew up watching films and Chitrahaar. All I wanted was to be in Chitrahaar — the idea was to see myself on screen. Also, I always loved having an audience,” says she.

Born and brought up in Delhi, Bhaskar completed her graduation from Delhi University — Bachelors in English Honors from Miranda House — and later pursued Masters in Sociology from Jawaharlal Nehru University. As a student, she part took in various theatre workshops. “I have never done professional theatre but have been more of an amateur theatre student. So, I don’t prefer being called a theatre artist. When I decided to leave for Mumbai, the switch wasn’t from theatre to films, it was from Delhi to Mumbai — the cultural change came as a shock to me because Mumbai is driven by business and Bollywood, the elite professions. Also, the work culture was different from Delhi. So, it took me some time to adjust. Also, I went straight out of JNU — for us it was torn pants, kurtas, and a bag to a city blooming with heels and makeup. I used to be terrorised. I even used to read fashion magazines to learn the words for the various kinds of clothing. But now I know it’s part of the game. It becomes clinical. If it’s red carpet appearance, then I have to get a stylist, wear the makeup and do the high heels, but when I come back home, it’s normal.”

It’s been 8 years since her first film. Madholal Keep Walking was released in 2010 and Tanu Weds Manu in 2011. “It has been a wholesome journey. Yes, there were phases that were low and depressing; when I didn’t get any work but I think with Raanjhana everything fell into place. Now I feel like a part of this industry. I feel confident and secure. And am always excited to do new work,” says Bhaskar, who is working on two web series — one that she has finished shooting and another that will begin in June. “The digital space has actually opened up a fantastic platform for actors and for uncensored content,” she opines.

Bhaskar is yet to sign another film because after Nil Battey Sannata, Anaarkali... and Veere..., she is taking time to decide her next. “I don’t know what to do because I want to match the films I take in the future with the ones that are already in my pocket,” she signs off.