The 2019 CWC is also significant because of its venue – England and Wales – the very grounds on which India enjoyed its first WC win way back in 1983. 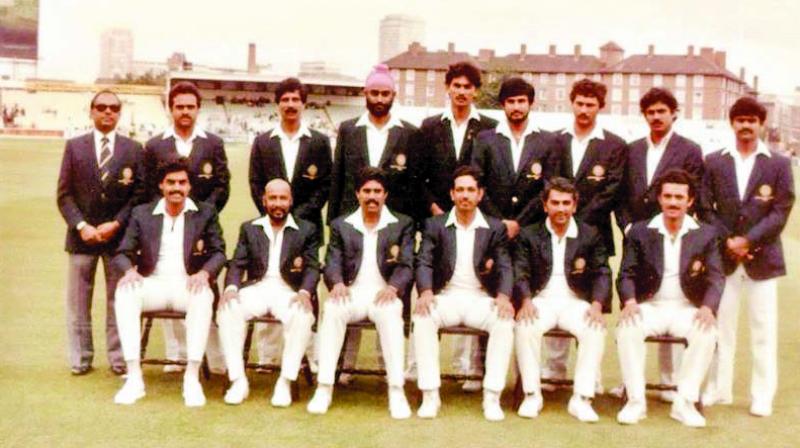 As the players and fans gear up for the ICC Cricket World Cup, we look back at our iconic 1983 win in the same venue and speak to players from the historic squad on India's chances of bringing home the trophy.

With the ICC 2019 Men’s Cricket World Cup set to begin today, excitement among cricketing enthusiasts has reached fever pitch. Team India fans are confident about painting the cricketing world blue, as going by the team’s current ICC ODI Rankings and its creme-de-la-creme squad, the glistening WC trophy seems well within the team’s reach. The 12th edition of the CWC has already created a buzz because of the ICC’s decision to limit the number of participating teams to 10 (2011 and 2015 CWC saw the participation of 14 teams) In the revised format, each nation will play against the nine others once in the group stage and the top four teams will move directly to the semi-finals, with the remaining six being knocked out of the tournament.

The 2019 CWC is also significant because of its venue – England and Wales – the very grounds on which India enjoyed its first WC win way back in 1983. It was within the hallowed walls of Lord’s Stadium that the Indian squad, led by Kapil Dev, defeated the West Indies to lead India to its first WC victory. The achievement has a special place in the annals of Indian history, and will now be immortalised on film as well in the upcoming sports drama, ‘83, directed by Kabir Khan and starring Ranveer Singh.

While the WC has undergone many changes since its 1983 offering, the most noticeable being the number of overs per innings, (60 back then), jersey and ball colour (all teams wore white and played with a red ball) and match timings (matches were played only during daylight), some factors remain the same for the upcoming WC, like England’s capricious weather that can give one side an added advantage, and of course, the immense pressure that comes with playing a tournament your entire country wants you to win.

Former captain of India and chief selector, Dilip Balwant Vengsarkar who was part of the 1983 winning squad, says that it’s crucial for our Men in Blue to acclimatise quickly to England’s unpredictable weather. He says, “In England, conditions differ dramatically. Sometimes it’s cold and cloudy and the ball spins a lot; suddenly it may rain, making playing conditions difficult and suddenly there’s sunshine, which is good to bat on. So, you can experience all four seasons in very short intervals. You have to get acclimatised to the conditions very quickly.”

The ex-cricketer, who scored centuries in three consecutive test appearances at Lord’s, also feels that winning the WC is a team effort and that it’s not ideal to rely on a few individuals because a sudden set-back can confront any player. Recounting his own mishap during the team’s 1983 outing, he says, “I was injured while playing against Australia during the quarterfinals. We were doing well, we were chasing the target and I got injured. It was a horrible feeling because I was in good form too. It was frustrating, But India won the WC and that was a very happy moment.” When asked who he thinks could be the probable contenders in the semi-finals this year, he says, “England, India, Australia and probably West Indies. The finals will be anybody’s battle.”

Former cricketer Madan Lal, who took three wickets during the 1983 final, including the crucial Vivian Richards’ wicket, which acted as a turning point during the match (Kapil Dev took the extraordinary catch after a long sprint) feels that today’s players are playing under a lot more pressure. And so, the only way to stay strong is to have an unshakable faith in the team’s abilities. “When we were playing, there was no pressure. These players have a lot of pressure because, over the years, we have improved a lot. We’re the number two team in the world. And so, I believe the team should play the game the way it knows best. Believe in your ability and I'm sure they’ll win the WC. Keep away from the pressure because there’s going to be a lot of it. Also, everybody should contribute, like we did in 83. That’s the only way to win big things.”

Syed Kirmani, one of India’s finest stumpers who won the award for the best wicket keeper in the 1983 World Cup, and dismissed West Indian batsman Faroud Bacchus during the final match, believes that the Indian team is well poised for victory. “We are a very competent side. We are very well balanced when compared to England, South Africa, Australia and New Zealand. The team is in good form too. I will not be surprised if England turns the tables because they have been very close to winning in previous years, but unfortunately they never took the trophy home. Now, they are a very formidable side at the moment.

But I do think India has a good chance of winning,” he says and adds a message for the team saying, “Don’t be complacent when you're doing well. Every match should be taken in the right spirit and never lightly. Think positive. You have to believe in your capabilities and never buckle under pressure. The West Indies succumbed under pressure and panicked when they were playing against us in the 1983 finals.”

We ask him if the current Indian team has a player with that ‘x’ factor, who can turn the tides when most needed. To this, he says, “Well, there are quite a few. There’s Hardik Pandya, MS Dhoni, Virat Kholi, Rohit Sharma or the left-arm spinner Kuldeep Yadav or even Yuzvendra Chahal, for that matter. No one expected Mohinder Amarnath to become the man of the series in 1983. So, anything can happen.”

Veteran sports journalist, Ayaz Memon, who has seen about 10 WCs till date and recalls being in the stadium when Kapil Dev bailed out India with his historic 175 not-out performance in the match against Zimbabwe in 1983 (the only match that was never broadcasted because the BBC went on a strike that day) feels that the current squad has a good mix of experienced and young players to carry us to victory. But, the x-factor lies with all-rounder and man with a golden arm, Hardik Pandya. While admitting that he would like for more teams to be included in the WC, he does say that this is one of the most 'open' WCs, because there's a lot of access to information, be it a player's performance style, strengths or weaknesses. “Because of T20 and other formats, players know each other better. Also, there's a lot of transferring of information. So, I wouldn't be surprised if a Bangladesh or Afghanistan end up tripping the fancier teams.”