When Salman, Ajay, Akshay and Saif ‘promoted’ Ranbir's Sanju more than 2 decades ago

Rishi Kapoor had an interesting take on a throwback picture of the actors coming together for ‘Sanju.’ 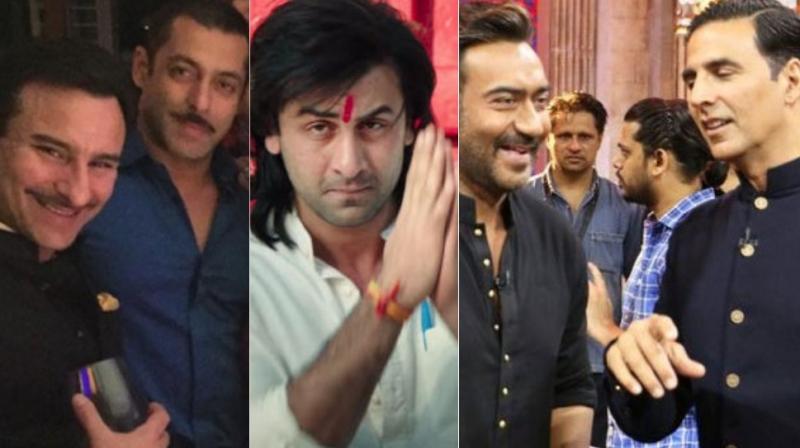 Mumbai: The much awaited biopic on Sanjay Dutt, ‘Sanju’, has finally hit the theatres and has not just opened to majority of outstanding reviews, but has also taken the highest collections for first day this year.

The lead actor, Ranbir Kapoor, has been on a promotional spree for the film, being seen at multiple events, screenings and media interactions for the last two weeks.

No, we are not talking about their tweets or comments praising the film before or after watching it. The quartet had actually ‘promoted’ the film more than two decades ago.

Well, we are not talking the film too, but the person Sanju.

So Ranbir’s father Rishi Kapoor shared this throwback picture of the actors holding ‘Sanju We’re with u’ placards, and joked that these people have been promoting the film ever since.

Thank you! These people been promoting the film ever since! pic.twitter.com/Ot2iDM9Hk7

The real story behind the picture is that the actors had come together to express solidarity with Sanju after he was arrested in the 1993 Bombay blasts case.

Interestingly, though Kapoor Sr joked about it, the truth is that the four actors through this picture are indeed promoting the film today.

While Saif today is his brother-in-law and Ajay is doing a film with him, not many would’ve expected Ranbir’s ‘foe’ Salman to be promoting his film in any way possible.