Entertainment   Bollywood  30 Aug 2019  I am not a feminist, I am a humanist: Zeenat Aman
Entertainment, Bollywood

I am not a feminist, I am a humanist: Zeenat Aman

Zeenat Aman may have started her career with a 1971 film Hungama, but the actress shot to fame in Hare Rama Hare Krishna. 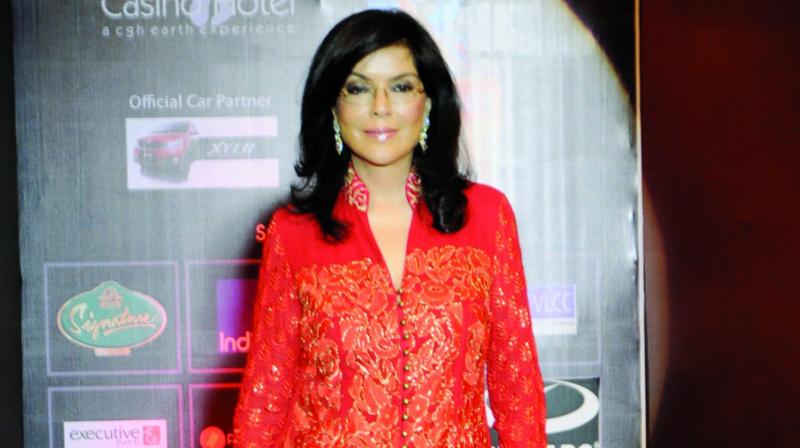 In a freewheeling chat with Zeenat Aman, the legendary actress talks about her long career in the industry,  the changes she sees today, and her views on the Me Too movement.

When Dev Anand first wrote the script for his movie Hare Rama Hare Krishna, the actor had a tough time narrowing down on an actress who would essay his sister on screen rather than a love-interest. To play the role of Janice, a free-spirited, marijuana-smoking hippie who’d dance to Dum Maaro Dum, Anand was searching for someone ‘Indian in looks but Western in upbringing’. Who’d have known that a chance meeting at a party with the newly crowned Miss Asia Pacific of the time would not only give him his Janice but also give Bollywood one of its most versatile, talented and daring actresses.

Zeenat Aman may have started her career with a 1971 film Hungama, but the actress shot to fame in Hare Rama Hare Krishna. Post that, the actress walked on the road of success, starring in blockbuster films like Yaadon Ki Baarat, Heera Panna, Dharam Veer, Satyam Shivam Sundaram, and Don among others. “I started off in 1971, and I am so grateful for this wonderful journey. You tend to take your journey for granted after a while, but when I pause and look back, I feel blessed that I had so many opportunities. I am still alive and kicking and that’s a blessing,” says Aman, who’s clocking 48 years in the industry this year.

In the ’70s and  ’80s, when most heroines were careful to pick roles that adhered to conventional notions of morality, Aman dared to be different. Whether it was sporting daring swimsuits, or playing grey roles, Aman was quite ahead of her time. “I get this quite often. People do tell me, even now, that I have been ahead of my time in terms of fashion and choosing scripts but it was all not planned. It just happened and I am happy about it. You just go with the flow, do what you like the most and your taste reflects your personality,” she says.

And there seems to be no stopping the 67-year-old actress, as she will be next seen in Ashutosh Gowariker’s historical drama Panipat, which also stars Arjun Kapoor, Kriti Sanon, and Sanjay Dutt. Talking about it, the actress reveals that she was elated to have been offered a role in the director’s movie, and further adds, “I am just doing a little cameo in the film but it was fun to work with such energetic people. It was nice.”

For the veteran actress, the fact that she's still getting roles signifies that change is afoot in Bollywood.

“I think it’s wonderful to see how scripts are being written for actresses of my age. It’s a change that we all have been waiting for. It’s a great shift if women are being given opportunities to play strong and relevant parts that reflect the changes in our society. It’s wonderful and necessary,” says the Dostana actress.

However, Aman is also witnessing the cons of changing times. In today’s time, apart from delivering stellar performances, the actors also have to put in a lot of effort to promote the film if they want their movies to become a hit. “In those days, we didn’t promote ourselves, we just did our work. It was a different time, there were no mobile phones, no entertainment at your fingertips, no digital platform; all these things were not there,” she says before adding that people used to just wait to go to movie theatres to watch their favourite stars on big screens.  “Now, it is all about promotions, and I am completely on a back foot. I did survive without promotions but now it is difficult for the younger generation,” she adds.

Further, the veteran is all out to support women in every way possible, and a recent example of the same would be when she came to support Imlibenla Wati for a non-commercial shoot. Wati, who hails from Nagaland, bagged the title of Miss Nagaland 2012, followed by Miss India Elite 2015, and Miss Super Talent World Runner Up 2016.

Unlike the actresses of her time, the current batch of actresses is no more hesitant to speak up about their rights. Talking about the Me Too movement that has gripped the movie industry, the Don actress says, “I think it’s important for women to speak up, it’s important to speak up for their rights. It’s very essential, and as a woman, I feel good to see that the young women are now opening up. All women, across the world in fact, and I am very pro-women.” Although when asked if she is a feminist, Aman replies, “I am not a feminist, I am a humanist. I want whoever is right to win.”

Many have aspired to follow the footsteps of the actress, but her son Zahaan Khan is an exception. Rather than taking up acting, Khan has chosen to be a music composer. “I don’t know what to do with this boy. He receives so many offers as a leading man but he doesn’t want to act at all. He wants to do music. We have had discussions and debates, so yes he wants to do music. The other gentleman is into film direction; he is a writer and director, so both of them are within the periphery of the entertainment business,” concludes the actress.