Sridevi impresses with her paintings skills, Bollywood stars among beneficiaries

Salman Khan and Sonam Kapoor have been gifted portraits by the veteran actress, who still diligently practises it. 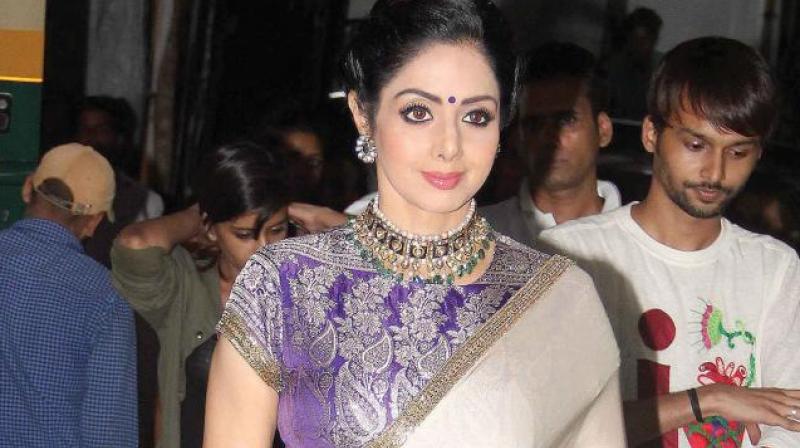 Sridevi was last seen in 'Mom.'

Mumbai: Bollywood is filled with multi-talented artists, who showcase their numerous talents in their films.

But not many know that even Sridevi is one such multi-faceted actress.

With a filmography of 300 films and numerous awards, one would think that acting would be Sridevi’s most prized asset. But the actress also impresses with her lesser-known talent of painting.

One of her paintings had earlier made news in 2010 when it was auctioned at the popular auction house Christie's.

Her painting in tribute to legendary pop icon Michael Jackson in 2014 had also generated significant buzz.

Not much is otherwise known about the veteran actress’ painting skills, but now it has emerged that Sridevi regularly spends time with the hobby for about five-10 hours a week, according to a report in Mumbai Mirror.

Not just that, several popular celebrities from the film industry have been gifted some of the art pieces she created.

Salman, who had famously claimed Sridevi is a bigger star than him, Shah Rukh and Aamir Khan and who himself is a painter, has been one of the beneficiaries of her art works.

Salman shares a good equation with the family, having collaborated on several films with her husband, Boney Kapoor.

Her husband’s niece Sonam Kapoor received a portrait of herself, which finds a place on a wall of the Kapoor house.

Not just Sonam, Sridevi has also painted portraits of her daughters Janhvi and Khushi.

“Apart from Sonam’s portrait, Sri has painted several other family members too, but she does not like sharing the images of her paintings. Her passion is extremely personal to her. She began painting at a very young age and despite the insistence of several friends and family members, she has not agreed to host an exhibition of her work till date,” a source told the tabloid.

Unlike her acting chops that we can see on screen in whichever film we want, this talent would, however, stay private and only for her close ones.