The to-be-soon-wedded couple posed and smiled happily for the cameras. 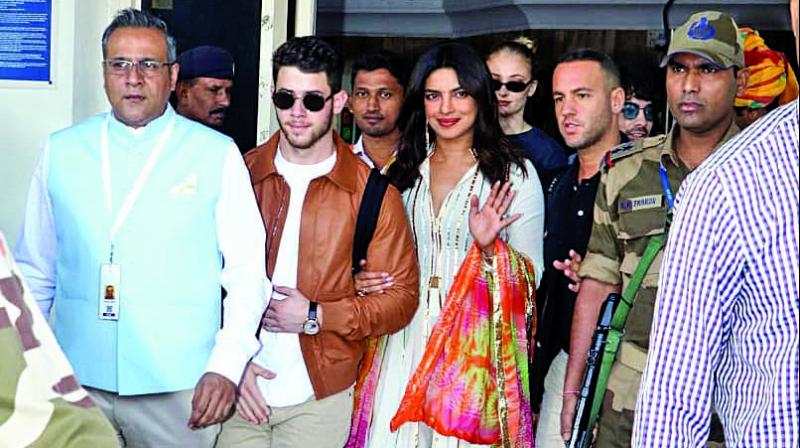 Peecee was dressed in a white salwar suit and Nick wore a jacket over his tee and jeans.

Priyanka Chopra and Nick Jonas have finally left for Jodhpur to get married. The couple, who will have a few ceremonies at the Mehrangarh Fort, will later tie the knot at Umaid Bhawan palace.

For those who missed watching Thugs of Hindostan, Mehrangarh Fort has been captured in all its majestic view in the film.

The to-be-soon-wedded couple posed and smiled happily for the cameras. Priyanka was dressed in a white salwar suit and Nick wore a jacket over his tee and jeans.

The two were accompanied by their families, including cousin Parineeti Chopra who went along with PC’s mother Madhu Chopra and a few other relatives. Nick’s brother Joe Jonas and fiancée Sophie Turner were also part of the entourage.

“On Wednesday, there was a puja in the PC household at their old house. Prayers were offered for the smooth conduct of the marriage and life beyond. The pre-wedding ceremonies in Jodhpur will begin on Thursday evening and will culminate in the marriage on December 2. The mehndi and sangeet
ceremonies will precede the wedding,” sources say.

Priyanka and Nick got engaged during a well-guarded roka ceremony in August. Priyanka opted out of Salman Khan’s film Bharat because of her engagement and impending wedding.