Zero: 'I was mesmerized by her', says Aanand L Rai about Sridevi

Reportedly, Sridevi will be seen playing herself in Shah Rukh Khan’s upcoming film. 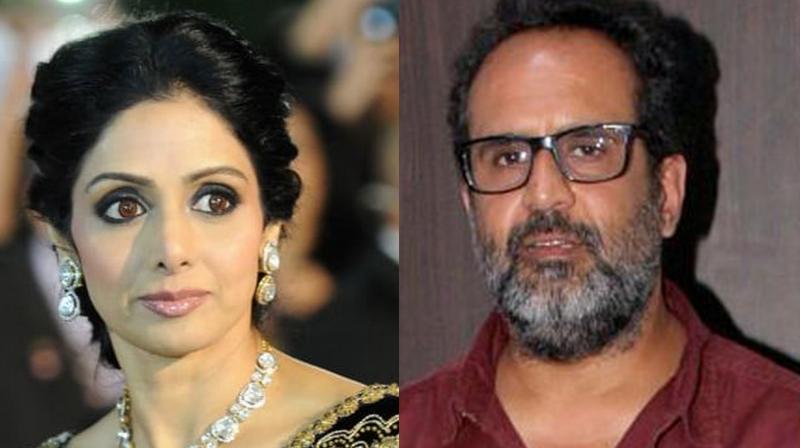 Mumbai: Director Anand L Rai seems to be in awe with Sridevi’s presence on the sets of his upcoming  film ‘Zero’ for that short while only. Explaining the same about her aura and presence, he elaborates, “Working with Sridevi – I feel, I was blessed.  I got a chance to spend a few moments with her. I always cherished this dream of working with her. However, working for just a few moments too felt great.”

Adding more about having watched her film he says, “Sridevi is one actor whose performance makes us know the difference that an actor brings in facing the camera. ‘Camera ke samne aane ke baad Sridevi’s performance kaise badlti hai as an actor yeh bahut bade lesson ki tarah hai hum sabke liye’ (How she changes as an actor no sooner she faces the cameras. This is a great learning lesson for all of us.) I am really happy that God has bestowed upon me that one day few moments to spend with her. I was literally mesmerized with her performances.”

So how was the aura from the time she entered the sets? Pat comes the reply from Rai: “We were all like awe struck …ki aaj  un ke darshan ho gaye.”

Praising Sridevi, the ‘Tanu Weds Manu’ director says, “We did not know how the time went by from the time she entered until she left. But yes! She surprised me and all others present on the sets too. She was so much engrossed listening to me while I was explaining her role. She literally wanted to give more than what I was trying to extract from her on par with her acting capabilities. Indeed getting to know this quality of hers, on the shooting floors I was feeling like taking away more than I wanted for the role while she was acting. She is such a fabulous actor and above all a great human being. She always wishes to leave no stone unturned on par with her performances. Also, while interacting on the shooting floors, I could feel for her…. the shooting floors is like a Temple for her….and her expressions are clear….from within...as if she is saying,” Mein nahi jaa rahi hoon …jab tak mein director ko woh sab nahi de dun apni acting ke zariye. jo unhe chahiye  iss kirdar  mein.(I will never leave until I have given what the director is looking for from me on par with this character of mine)

Lastly he says,"The impact in the character is all from her emotional and breathtaking performances. You need to watch what Sridevi is doing in the film. That’s a surprise element for you guys.”