The film has been called out for allegedly putting out inflated box office collections. 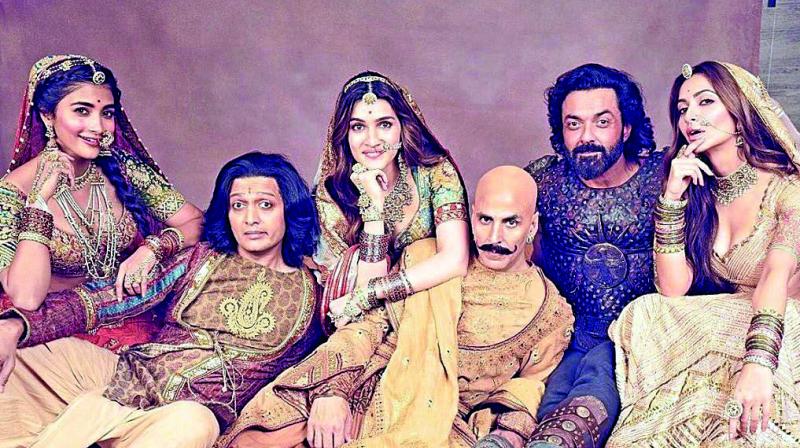 Trade experts, however, are divided in their opinion on the collections of Housefull 4.

The stiff competition among film producers, the lack of unity in the entertainment industry and the determination to create a blockbuster against all odds, have never been more explicitly enunciated in this dog-eat-dog industry than in the case of Housefull 4, a film that is being questioned for its inflated numbers.

It began when the otherwise-uncontroversial producer Ronnie Screwvala came up with a Tweet that seems a direct dig at the official box-office collections being put out by the Housefull 4 producers. Ronnie tweeted, “Isn’t it time everyone reports Box Office numbers accurately! @KomalNahta @taran_adarsh ... accuracy of information builds CREDIBILITY which the movie industry needs so badly ... and not sure how long-to appease egos will Studios and all keep encouraging pumped up data on numbers. (sic)”

The otherwise-diplomatic Akshay Kumar came to his film’s defense stating, “Thank you for loving us and laughing with us. It is because of your love we are where we are today. Thanks to all my fans and audiences who have poured unconditional love on #HouseFull4. Thank you for showing us that nothing beats hate more than love (sic),”

When we contacted Sajid Nadiadwala for a comment on Screwvala’s unambiguous censure, Sajid refrained from replying, as Screwvala had not named Housefull 4 in his tweet.

A source very close to Nadiadwala said, “Ronnie is a dear friend of Sajid Nadiadwala. They have collaborated on four films. Ronnie would never speak like that about Sajid’s film.  Let him come out and openly accuse Housefull 4 of fudged box-office figures. Then we’ll see.  By the way, shouldn’t Ronnie be worrying about the box office figures of his own film The Sky Is Pink? I would say the collections were not in the pink of health.”

Trade experts, however, are divided in their opinion on  the collections of  Housefull 4.

Says Atul Mohan, “I think even the negative or bad reviews have worked in its favour big time. Mindless hai to kaise? (If it’s mindless, then how much?) People are  curious to know that. The marketing team has rightly pitched the product, be it with Bala challenge or the train travelling campaign. An ensemble cast, a successful franchise, and comedy, this is what attracts more footfalls during Diwali and HF4 has proved that.”

However, trade insider Girish Johar has his reservations on the box-office figures officially quoted by the Housefull makers. “Seeing the bullish trend of the year so far and I was expecting the Diwali releases combined to at least give a 10% jump vis-a-vis last year’s Diwali collections. Obviously, Housefull 4 was to be a major contributor in that pie but that didn’t happen. It has been a subdued Diwali box-office, so far. In fact, the combined collections of all three releases couldn’t even come to a good total. Traditionally, day after Diwali is huge for Indian BO and in the past has even set new records, which has not happened this year.”

Another prominent distributor Kishan Damani comments, “Housefull got the advantage of Akshay Kumar’s stardom and the brand pull of the Housefull series. The collections have been highly exaggerated . The actual total of four days collection is approximately `70-72 crores while producers report `87 crores.” Weak competition from other releases gave it more advantages. But the drop in the coming days will be huge though it will enjoy another weekend due to the absence of any good new release.”

And so the debate continues. Meanwhile, Screwvala clarified that his tweet wasn’t targeted at Housefull 4, nipping all speculation in the bud. “Just to clarify that my tweet was not directed at any one movie (as is being wrongly assumed) but just an overall comment for the future + my reasons to tag some of the industry authorities was because they can make a difference to the credibility,” read his Tweet.