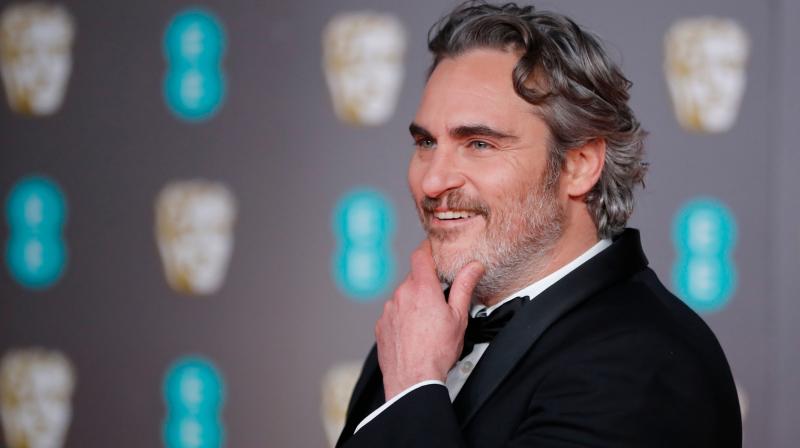 US actor Joaquin Phoenix poses on the red carpet upon arrival at the BAFTA British Academy Film Awards at the Royal Albert Hall in London on February 2, 2020. (AFP)

LONDON: British filmmaker Sam Mendes' war drama 1917 ruled the 2020 edition of Baftas with seven wins, including best film, best British film and best director but it was best actor winner Joaquin Phoenix calling out the "systemic racism" of the industry that received a lot of attention at the awards ceremony.

Phoenix, who was awarded the Bafta for his titular performance in Joker, accused the industry of sending out "a clear message to people of colour that you are not welcome here".

Both British Academy of Film and Television and Academy of Motion Pictures Arts and Sciences were heavily criticised for the lack of representation and diversity after the nominations were announced.

The acting categories had shut out people of colour while no women directors were recognised in the directing segment.

"I don't think anybody wants a handout or preferential treatment, although that's what we give ourselves every year. I think people just want to be acknowledged, appreciated and respected for their work. This is not a self-righteous condemnation because I'm ashamed to say that I'm part of the problem," Phoenix said on stage at the Royal Albert Hall.

"I have not done everything in my power to ensure that the sets I work on are inclusive, but I think it's more than just having sets that are multicultural. We have to do the hard work to truly understand systemic racism. I think it is the obligation of the people that have created and perpetuate and benefit from a system of oppression to be the ones that dismantle it. So that's on us," he concluded.

"We find ourselves talking again about the need to do more to address diversity in the sector. That cannot be right in this day and age," he said.

Actor Rebel Wilson took a potshot at the Academy for not nominating women directors. She said, "I don't think I could do what they do, honestly. I just don't have the b***s," as the room erupted in laughter.

Actor Renee Zellweger took home the best actress honour for her role as legendary singer-actor Judy Garland in Judy and had a brief reunion with her Bridget Jones co-star Hugh Grant near the stage.

Grant, who was one of the presenters, joked, "First of all, well done, Jones. That was a very silly little dress, I thought," the actor, who played the role of Daniel Cleaver in the movie, said.

Brad Pitt and Laura Dern continued their winning streak in the supporting categories as they bagged one more for their performances in Quentin Tarantino's revisionist period piece Once Upon a Time in Hollywood and divorce drama Marriage Story, respectively.

In a reference to the UK leaving the European Union, Pitt said -- in a written note read by his Once Upon a Time... co-star Margot Robbie-- "Hey Brits, heard you just got single. Welcome to the club!"

"He's gonna name this Harry, because he's really excited about bringing this back to the States with him," Robbie said in another dig at the locals in light of Prince Harry and his wife Meghan Markle stepping down as senior royals as Prince William and wife Kate Middleton chuckled in the audience.

"This is very, very cool for me. (I) come from the colonies. We know it's been a hard week for you guys," the New Zealander filmmaker began his acceptance speech.

Lifting the trophy, Waititi said, "It's been very nice to take a little bit of your gold, back home, where it belongs."

Jay Roach-directed Bombshell, based on the accounts of several women at Fox News who set out to expose CEO Roger Ailes for sexual harassment, picked up best hair and make-up trophies.

Greta Gerwig's adaptation of Little Women secured a win in the best costume category and Ford v Ferrari, which released in the UK as Le Mans '66, was adjudged the film with best editing.

Actor-director Andy Serkis was honoured with the outstanding British contribution to film award, which was presented to him by veteran theatre and film actor Ian McKellen.

Bait was named outstanding debut by a British writer, director or producer.