Nefarious doping revelations of how sports is mired in scandal, far more than one could imagine, watch these dark secrets unfold. 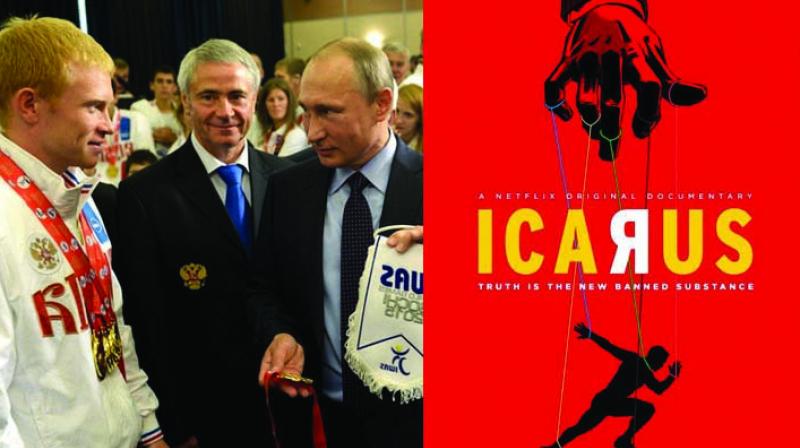 However, just days after the games ended, the International Olympic Committee lifted its ban even though the country is still non-compliant with the World Anti-Doping Agency, Deadline.

First things first. If you haven’t watched The Armstrong Lie, then go watch it.

Then, picture yourself sitting in a movie hall looking at the upholstery on the walls (which people tell you is ‘acoustic control’) and wondering why you’re not looking at the screen instead. It’s happened to all of us at some point, and we all know why too. We’re unsure about what exactly is going on onscreen. That’s exactly how I felt for the first half hour of this documentary. I was about to call it quits, and write it off as one of those rare Netlflix misses, when the bigger picture began to reveal itself. The first part is about an American cyclist who contacts Dr Grigory Rodchenkov (then-director of the Moscow Anti-Doping Centre), in Russia, to help him enhance his endurance levels.

Bryan Fogel, the Icarus filmmaker, a recreational cyclist delved deeper into the unanswered questions about Lance Armstrong’s scandalous career, and that became Icarus.

That Lance Armstrong had evaded 500 anti-doping controls clean is what prompted the filmmaker to go behind the brawn and sweat to find out what really happens, and how the system works, or does not work.

The massive lie that is international level athletics and sport that was made familiar to me through the watching of The Armstrong Lie, is far larger than I could have imagined. In fact, I wouldn’t be surprised if more whistle blowers from around the world expose the dirty secrets of other facets of what I can only term as “entertainment” now. It’s not sport anymore. It’s not athletics. It’s just reality television where the “reality” part is (ironically) falsified.

Fortunately, just when I was ready to throw in the towel, the bigger picture of this story began to reveal itself (the first part is about an American cyclist wanting to enhance his endurance levels by contacting a Russian “scientist”).

Be warned, if you’re a sports fan or enjoy watching the Olympics, this documentary will wane that fandom and subdue that enjoyment with absolute certainty.

Whistle-blowing. Corruption at the highest level and a methodical endeavour in amateur sleuthing. It’s all there, no wonder it won best documentary at the 90th annual Academy Awards. So, go watch this beast, and you’ll know why its director Brian Fogel, dedicated the award to the whistleblower; Grigory Rodchenkov.

— The writer is a coffee roaster, vaping enthusiast, cinema buff and seeker of unique stories