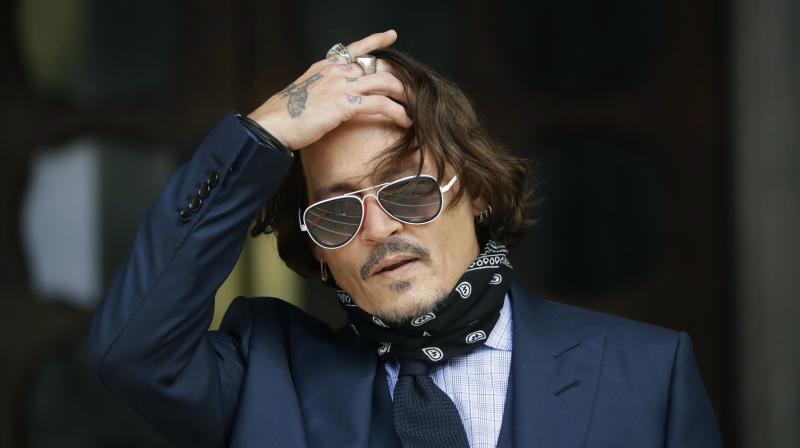 American actor Johnny Depp gestures to the media as he arrives at the High Court in London. The UK High Court has ruled against Johnny Depp in his libel suit against the owner of the Sun newpaper over wife-beating allegation, it was reported on Monday, Nov. 2, 2020. (AP)

Depp had sued News Group Newspapers, publisher of The Sun, and the newspaper's executive editor, Dan Wootton, at London's High Court over an April 2018 article that called him a "wife beater", accusing him of assaulting his ex-wife Amber Heard.

After a contentious summer trial that made global headlines for weeks, Judge Andrew Nicol on Monday dismissed the suit, saying that what the paper published was "substantially true".

In a statement posted on Instagram on Friday, the 57-year-old actor said that he was asked by Warner Bros to leave the franchise and he has accepted the request.

"In light of recent events, I would like to make the following short statement. Firstly, I'd like to thank everybody who has gifted me with their support and loyalty. I have been humbled and moved by your many messages of love and concern, particularly over the last few days.

"Secondly, I wish to let you know that I have been asked to resign by Warner Bros from my role as Grindelwald in 'Fantastic Beasts' and I have respected and agreed to that request," Depp wrote.

The actor, known for blockbuster hits like "Pirates of the Caribbean" series, "Alice in Wonderland" and "Charlie and the Chocolate Factory", first played Grindelwald in 2016's "Fantastic Beasts and Where to Find Them".

He reprised the part in 2018's "Fantastic Beasts: The Crimes of Grindelwald" and was set to start shooting for the third part next year.

In his statement, Depp also revealed that he plans to appeal the ruling.

"The surreal judgement of the court in the UK will not change my fight to tell the truth and I confirm that I plan to appeal.

"My resolve remains strong and I intend to prove that the allegations against me are false. My life and career will not be defined by this moment in time," the actor concluded.

Warner Bros confirmed Depp's departure and announced his role will be recast before the third instalment opens in theatres, reported Entertainment Weekly.

"Johnny Depp will depart the 'Fantastic Beasts' franchise. We thank Johnny for his work on the films to date.

'Fantastic Beasts 3' is currently in production, and the role of Gellert Grindelwald will be recast. The film will debut in theatres worldwide in the summer of 2022," the studio said in a statement.