While Jolie she had a bad experience with him, Gwyneth Paltrow stated he attempted to lure her for a massage. 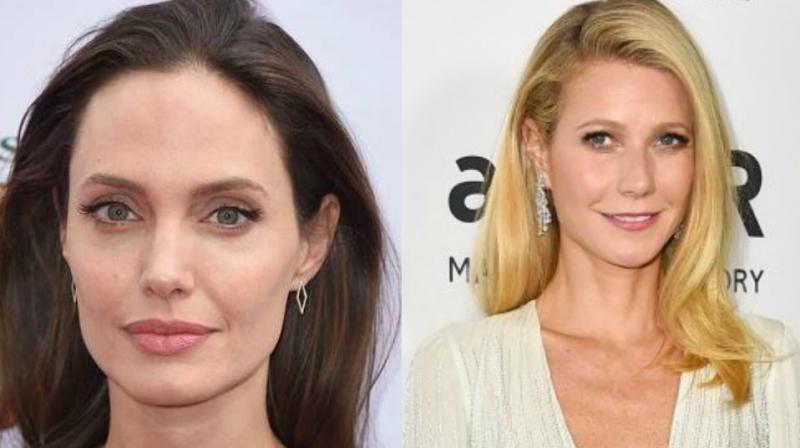 Angelina Jolie and Gwyneth Paltrow have a common connection in Brad Pitt being their exes. (Photos: AP)

New York: A flood of allegations poured in Tuesday against Harvey Weinstein in on-the-record reports that detailed claims of sexual abuse and included testimonies from Gwyneth Paltrow and Angelina Jolie, further intensifying the already explosive collapse of the disgraced movie mogul.

Three women accused Weinstein of raping them in a story published online by The New Yorker, including the Italian actress and filmmaker Asia Argento and a woman who was an aspiring actress in college when she caught Weinstein's eye. A representative for the mogul vehemently denied the allegations in a statement to the magazine.

In a follow-up to its earlier expose, The New York Times also reported Tuesday that many other actresses have in recent days added to the chorus of accusations surrounding Weinstein. Paltrow described Weinstein's attempt to lure her, then 22, into giving him a massage in a hotel room. The incident prompted her then-boyfriend Brad Pitt to angrily confront Weinstein at a film premiere.

Both reports significantly ratcheted up the unfolding scandal surrounding Weinstein, who was fired Sunday from the Weinstein Co. By the end of Tuesday, former President Barack Obama, Hillary Clinton, an array of movie stars and Weinstein's own wife, Georgina Chapman, had issued statements condemning Weinstein's alleged conduct. Chapman told People magazine she was leaving her husband after 10 years of marriage, citing Weinstein's "unforgivable actions."

"I know he has crushed a lot of people before," Argento told The New Yorker. "That's why this story - in my case, it's twenty years old, some of them are older - has never come out."

Attorneys for Weinstein, 65, did not immediately return messages Tuesday. The New Yorker quoted Weinstein representative Sallie Hofmeister responding that "any allegations of non-consensual sex are unequivocally denied by Mr. Weinstein."

"Mr. Weinstein has further confirmed that there were never any acts of retaliation against any women for refusing his advances. Mr. Weinstein obviously can't speak to anonymous allegations, but with respect to any women who have made allegations on the record, Mr. Weinstein believes that all of these relationships were consensual," said Hofmeister. "Mr. Weinstein has begun counseling, has listened to the community and is pursuing a better path. Mr. Weinstein is hoping that, if he makes enough progress, he will be given a second chance."

The New Yorker story, written and researched by the NBC correspondent Ronan Farrow, claimed that thirteen women have said Weinstein sexually harassed or assaulted them between 1990 and 2015. The incidents described range from unwanted groping to forced sex. Some of those incidents overlap with the eight allegations of sexual harassment previously reported by The New York Times, all of which resulted in financial settlements.

But they also go much further. In the article, Rosanna Arquette and Mira Sorvino are among those who claim Weinstein sexually harassed them. Arquette described a 1990s incident at a Beverly Hills hotel in which Weinstein tried to make her give him a massage and then attempted to lead her hand to his penis. Afterward, the actress told the magazine, "He made things very difficult for me for years."

"I had a bad experience with Harvey Weinstein in my youth, and as a result, chose never to work with him again and warn others when they did," Jolie said in an email to the Times. "This behavior towards women in any field, any country is unacceptable."

Representatives for the actresses involved in both reports did not immediately return messages seeking comment.

The Italian news agency ANSA said it contacted Argento about the story, and said she responded with a text message that read: "It's all true, everything is written in the New Yorker. Now leave me in peace."

The New Yorker also reported that 16 former and current executives and assistants at The Weinstein Co. and Miramax either witnessed or knew of Weinstein's unwanted sexual advances. "All sixteen said the behavior was widely known within both Miramax and the Weinstein Company."

"Fired (the) Weinsteins because they were irresponsible, and Harvey was an incorrigible bully," said former Disney chief executive Michael Eisner on Twitter on Tuesday. "Had no idea he was capable of these horrible actions."

"Harvey Weinstein's reported behavior is abhorrent and unacceptable, and it has no place in our society," said Disney chief Bob Iger.

The New Yorker also revealed an audio recording made by the New York Police Department in 2015 in which Weinstein says he groped a model named Ambra Battilana Gutierrez. At the time, Manhattan District Attorney Cyrus R. Vance, Jr., announced that an investigation didn't support criminal charges.

"If we could have prosecuted Harvey Weinstein for the conduct that occurred in 2015, we would have," Karen Friedman-Agnifilo, chief assistant district attorney, said Tuesday.

"While the recording is horrifying to listen to, what emerged from the audio was insufficient to prove a crime under New York law, which requires prosecutors to establish criminal intent," she added. "Subsequent investigative steps undertaken in order to establish intent were not successful. This, coupled with other proof issues, meant that there was no choice but to conclude the investigation without criminal charges."

Weinstein was fired Sunday by the Weinstein Co., the studio he co-founded, three days after a bombshell New York Times expose alleged decades of crude sexual behavior on his part toward female employees and actresses, including Ashley Judd.

Weinstein responded to the report in a lengthy, rambling statement in which he pleaded for a second chance and apologized for the pain he had caused.

Since his firing, much of Hollywood has reacted with disgust and outraged, including Meryl Streep, Lena Dunham, Jennifer Lawrence and George Clooney. Congressional Democrats, including Senate Minority Leader Chuck Schumer and Massachusetts Senator Elizabeth Warren, have given charities thousands of dollars in donations they had received from Weinstein.

In a statement on Twitter on Tuesday, Clinton said she was "shocked and appalled" by the revelations about Weinstein. She praised the women coming forward: "Their courage and the support of others is critical in helping to stop this kind of behavior."

"Any man who demeans and degrades women in such fashion needs to be condemned and held accountable, regardless of wealth or status. We should celebrate the courage of women who have come forward to tell these painful stories," the statement said.

"I am saddened and angry that a man who I worked with used his position of power to intimidate, sexually harass and manipulate many women over decades," Ben Affleck wrote in a statement Tuesday. "The additional allegations of assault that I read this morning made me sick. This is completely unacceptable, and I find myself asking what I can do to make sure this doesn't happen to others."

Matt Damon, who collaborated frequently with Weinstein, and won a co-writing Oscar for 'Good Will Hunting' with Affleck, said he didn't know about Weinstein's behavior.

"This morning, I just feel absolutely sick to my stomach," Damon told the trade website Deadline Tuesday. "This kind of stuff can't happen."

Weinstein has not publicly commented since Thursday.