I am very open to do a film in India again, says Poorna Jagannathan

Says Poorna Jagannathan, in a chat about her new show Room 104, created by Mark Duplass and Jay Duplass.

Poorna Jagannathan, known in India for her spunky performance as a journalist in Delhi Belly, went onto make a name for herself in the American TV scene with her intense performance as a distressed mom in the critically-acclaimed show The Night Of. Poorna has now played a voice-only role in HBO’s anthology series Room 104 created by Mark and Jay Duplass. It is a set in a motel room. Each episode tells the story of different people who check into it. The actress opens to us about her role in the show and about contemporary American TV shows:

What are the advantages of acting in anthologies over shows that go on for multiple seasons?
Well, The Night Of was shot over three years and Room 104 was shot over two days. So, the commitment level is drastically different. I heard Room 104 was able to get high caliber actors because they were in and out with no strings attached. The show is also very experimental as many anthologies are. The episodes flip between genres: Ralphie is firmly in the horror genre, Voyeurs is a wordless, surrealistic performance art piece while the episode I’m in, The Internet, is very realistic and comical. In every aspect, there’s diversity in genres, story lines, actors, directors, writers. I think it’s one of the few things on TV that has achieved this level of diversity.

How did Room 104 happen?
I got a call asking if I wanted to be in a Duplass Brothers’ project. The caveat was that it was shooting the next day. I hadn’t read the script, I had no idea about my character, but you don’t say ‘No’ to the Duplass brothers when they come calling. They are absolutely amazing and I think the show captures the spirit of who they are perfectly. 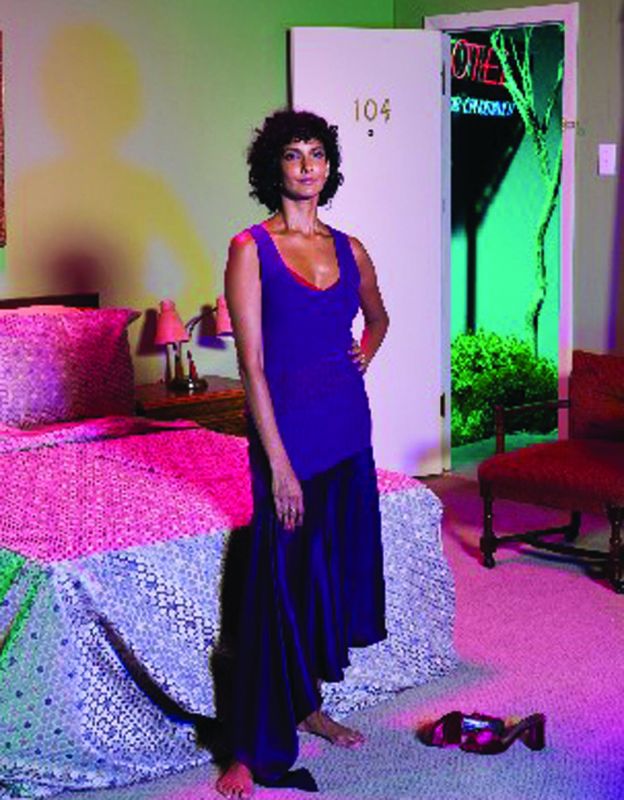 How difficult is to play a voice only role since you have only one way to bring out all your expressions?
I had no time to over think it. What you see and hear on screen is mostly from our first take. It was challenging in some ways but liberating in others. I wasn’t on the set. I was in a make-shift room down the hall and I had an earpiece on. Karan and I were talking on the phone in real time and to make my surroundings feel more like ‘my apartment’, the director, Doug Emmett, surrounded me with as many props as possible. At some point, I decided I wanted to chop vegetables while on the phone, so Doug appeared with a chopping board and celery! In the story, I have to search for the laptop and Doug hid it in the room — I actually couldn’t find it because he hid it so well, but the footage of Karan waiting while I search is priceless. The episode feels like a real phone conversation — there’s overlapping, there’s silences, there’s misunderstanding and there’s extreme clarity.

American TV is now going through a glorious phase with many innovations in terms of storytelling. How does it feel to be a part of it?
It actually feels great to be acting during a time when Netflix, Amazon and Hulu are hungry for original content. Casts are more diverse, as are the story lines. The big studio model worked to minimize risk and now it seems that risk is the new black. I feel lucky to be part of this phase of storytelling.

The plurality of shows has increased with shows like Night Of and Master Of None. Has the American TV become more inclusive than ever?
It’s changed a lot and people have fought hard to be where we are now. But we still have a long way to go — you’ll notice that many shows cast caucasians as the the first two or three lead principal characters, and then surround them with a more diverse cast. That equation must shift.

We didn’t see a lot more of you in the Indian cinema. Any particular reason?
I moved to India in 2011 to give it a shot. Delhi Belly was a great experience rooted in a fantastic script. But during my time there, I just wasn’t drawn to the scripts that I was getting. By 2012, The Night Of happened and although I was living in India with my family, I was working out of NYC — it became an untenable situation really fast. So we moved back to the States and I said ‘Tata, bye-bye’ to my fledgling Bollywood career. Of course, I’m very open to doing a film in India again. There are film makers like Ashim Ahluwalia and Vishal Bhardwaj that are such originals.